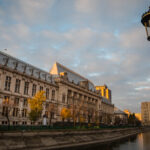 Share this article on:
Finance News in brief Romania Uncategorized

The crisis around the justice minister is related to the approval of a national development program worth EUR 10 billion that prime minister Citu has insisted upon. USR PLUS argues that its approval would mean the successor program would maintain a system launched in the past that allowed pro-government mayors to access funds without any controls over EU funded projects.

Minister Ion has refused to approve the related normative act which could lead to Citu deciding to dismiss the justice minister, arguing that he “opposed the modernization of Romania.”

Bulgaria to Hold Presidential and General Elections in November