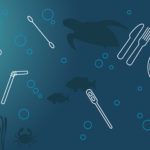 As of 3 July, the European Union has banned the 10 most-found in waterways single-use plastic products (SUPs).

The 10 most commonly found single-use plastic items on European beaches, alongside fishing gear, represent 70% of all marine litter. Therefore the EU member states have agreed to ban the most-used SUPs that, once used, are then thrown away, even if the degradation time for such iteis hundreds of years.

“The impacts of this plastic waste on the environment and our health are global and can be drastic. Single-use plastic products are more likely to end up in our seas than reusable options,” European legislators warn.

Lawmakers in Brussels want Europe to become a global forerunner in the global fight against marine litter and plastic pollution, therefore, they decided to pass the EU’s Directive on single-use plastics. The mandatory legislation differentiates between various groups of products and prescribes measures that they consider proportionate and tailored to get the most effective results. The Directive also incentivizes the use of available sustainable alternatives.

The 10 items included in the Directive are:

The goal is to ban the sale of items made from expanded polystyrene. Expanded polystyrene is being targeted because it easily breaks down into tiny white plastic balls which are blown around by the wind and eaten by fish or birds who think it’s food. In practice, for consumers, this will result in non-plastic straws, many more beverages in recyclable bottles, paper takeaway coffee cups instead of plastic – to give just a few examples.

There are new types of plastics, called bioplastics, but their development is only in the beginning stages, thus the EU has not yet regulated them. This means environmentally-friendly alternative SUPs not made of expanded polystyrene may remain on the market, allowing new eco-packaging solutions to appear on the market.