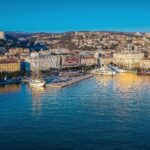 Wages in the Balkans: Where the Highs meet the Lows

Wages in the Balkans: Where the Highs meet the Lows

Few would call Europe a continent of extremes – yet wage differences are sometimes severe: in South-Eastern-Europe, in countries outside of the European Union, there are still some places where hourly wages are under EUR 2. Meanwhile, EU member states like Croatia and Slovenia offer much better pay, the latter being the wage champion in all of Central Europe.

Wages are just one indicator of economic prosperity but perhaps one of the key ones. Take affluent Luxembourg where the minimum salary is more than the average wage in Central Europe. But taken from the perspective of the Western Balkans, even Central European salaries are dreamlike. Serbia, a non-EU country, has one of the lowest minimum wages in Europe, amounting to EUR 262/month in 2021. The gross salary is around EUR 347/month – again, one of the lowest in Europe, lower only in Montenegro, Bulgaria, and Albania. The minimum hourly net wage rose to EUR 1.57 from EUR 1.47, which is a rate similar to that of some countries in Central America (like Guatemala or Dominica).

The wage situation is the best in the capital Belgrade, where the average salary amounts to EUR 510/month, but it is still one of the lowest salaries for a European capital, comparable only to those of Sarajevo in Bosnia Herzegovina, and slightly less than in Sofia, Bulgaria. Looking back two decades, the tendency is similar to most Central European countries: a very strong upward trend can be detected. Since 2001, the average wage rose from EUR 33 to EUR 562/month in December of 2020. The highest pay goes to those working in information and communications services, followed by financial and insurance activities and electricity, gas, steam, and air conditioning supply.

For investors looking at the cost-benefit analysis, the low costs seem to be appealing. It is not just the low wages but the low tax rate which could also attract businesses. Personal income tax in Serbia is only 10%, with a non-taxable amount of approximately 130 EUR. Serbia has one of the lowest income tax rates in Europe and across the globe, and remains well below the European averages for corporate and personal tax rates. The corporate tax rate is 15% and there is no official profit-to-turnover ratio. Capital gains are separately taxed also at 15%. The average corporate tax rate in Europe is 22.5%, which means Serbia lies in the group of traditionally favorable countries, like Cyprus, Ireland, or Hungary, the latter with the lowest corporate tax of 9%.

Croatia, which joined the EU only in July 2013, has recorded a swift increase in wages in almost all sectors, clearly surpassing its eastern neighbor, Serbia. The new minimum wage levels for 2021 are set at EUR 566 per month, equivalent to a yearly increase of 4.6%. The average wage rose slower: median net earnings for March 2021 amounted to EUR 800, while median gross earnings reached EUR 1030. Croatia’s average monthly pay in March was EUR 949, which is a 6.3% increase in nominal terms or 5% in real terms.

Higher education and highly qualified workers are much valued, so to attract them employers have to make a much better offer. The average net Croatian wage for university graduates exceeded EUR 1200/month back in pre-pandemic 2019 and increased by 11% over the last five years, while the salaries of unskilled workers grew by 20%. There is quite a wage disadvantage for those having only high school education, who earn only EUR 727 monthly, thus barely 60% of the average salary of university graduates. Wages for unskilled workers also skyrocketed in the last five years, growing the fastest – by a surprising 20% – but only exceeding EUR 530/month.

Besides the relatively low salaries, tax incentives provided by the Croatian government represent a business environment incentive for foreign investors. Austria, Italy, the Netherlands, and Germany are among the most important investors in Croatia. The food industry, tourism sector, engineering, textile industry, manufacturing, automotive, ICT and the pharmaceutical sector are well-developed sectors into which most foreign investments are directed. The low costs for hiring local staff are also priorities for foreign investors, who have the same rights and legal status as any domestic investor, but also benefit from several other incentives provided by the government, e.g., the reduction of the corporate income tax rate, labor incentives, and various forms of state support and non-refundable grants.

Joining the EU in the first wave of accession called the Big Bang in 2004, Slovenia has always been considered the “gem” of the region. Being by far the richest of all Central European countries at the time of accession, and offering relatively high wages for its domestic workforce, it has carefully safeguarded a number of strategic sectors from foreign investors. But the heydays are gone, and after the 2009 financial crisis, Slovenia had to reconsider some of its economic policies.

But some of its advantages remain: Slovenia still has the highest minimum wage among Central and Eastern European countries, amounting to EUR 941/month, while setting the minimum wage in 2021 at EUR 1,024/month gross. This is 120% of the minimum cost of living. Over the past two decades, there have been two major minimum wage hikes, which brought the minimum wage closer to the average salary. In 2010, it rose from EUR 593/month gross to EUR 734, with companies being allowed to complete the transition until the end of 2011. Changes from 2018 brought the other major increase, to EUR 887/month gross for 2019 and to EUR 940/month for 2020.

As of this year, the minimum wage has to exceed the minimum cost of living by at least 20%, but not by more than 40%. All these changes have resulted in a narrowing gap between the minimum and average wages; in 2000, the minimum wage reached only 40.3% of the average wage, while in 2019, it amounted to 50.6%, making Slovenia the EU member state with the narrowest wage gap. Minimum wage growth has exceeded productivity growth throughout the last decade. Together with Portugal, Greece, Malta and Spain, Slovenia sits in the middle group in terms of minimum wage growth which ranged from EUR 700 to 1,050 in 2020. Gross wages doubled in the last 15 years, growing from EUR 1097 in 2005 to EUR 2028 in November of 2020. Wage growth in Slovenia averaged 3.30% from 2006 until 2021. The financial and insurance services recorded the highest average gross pay in March, totaling EUR 3,345/month.

Slovenia’s attractiveness to foreign investors in recent years continues to grow, mainly due to the high quality and availability of local suppliers. However, high labor costs, inflexibility of labor legislation, tax burden, and excessive administrative procedures remain among the biggest disadvantages. Among the OECD member states, Slovenia has the highest wage taxation. The share of social security contributions and personal income tax in labor costs is 42.9%, which is almost 10 percentage points higher than the OECD average.

The Slovenian government encourages collaboration between local and foreign investors with programs supporting mixed ownership of companies. There are also several governmental initiatives and state concessions accorded to investments bigger than EUR 500,000 in industry, services, and research. The main foreign investors in Slovenia are represented by Austria, Switzerland, the Netherlands, France, and Germany. In terms of attractiveness to German investors, this year Slovenia ranked 4th among 15 countries in Central and Eastern Europe, behind Estonia, the Czech Republic and Poland. But critics say additional efforts are needed to improve the business environment. Foreign investors would like to see simplification of the wage and remuneration system, as well as an adjustment to tax legislation for higher net wages, especially for the educated workforce.