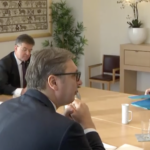 The EU brokered a last-ditch agreement between Kosovo and Serbia on Wednesday, 23 November, only for Serbian President Aleksandar Vucic to seemingly disregard the deal, which attempts to solve a long-running bilateral dispute over car registration plates.

The EU has spent almost a decade formally working with the countries in the once war-torn region, as a precondition to them joining the EU.

Kosovo had planned to start fining ethnic-Serbian motorists still using Serbia-issued registration plates on Thursday, and the EU and large Western countries expressed relief that this had been averted.

Serbia had meanwhile insisted that drivers entering its territory from Kosovo affix Serbia-issued stickers to their Kosovan registration plates.

According to Kosovar Prime Minister Albin Kurti, Vucic has stirred up resentment over the issue in north Kosovo, prompting mass resignations of ethnic-Serb MPs, judges, prosecutors, police officers and civil servants at the beginning of November.

Only a request to delay the move by 48 hours issued by Kovoso’s ally the US had prevented the fines from commencing earlier in the week. EU Special Representative Miroslav Lajcak thanked the US for its “invaluable support”.

However in the hours after the deal was agreed in Brussels late Wednesday evening, the two countries were expressing wildly different interpretations of the deal.

Sensing a triumphant end to the dispute, High Representative of the EU for Foreign Affairs and Security Policy Josep Borell tweeted after the meeting that “We have a deal!”

Borell also thanked Serbian official Petar Petkovic, Kosovo Deputy Prime Minister Besnik Bislimi and the EU’s Lajcak for de-escalating the situation on Wednesday, something which Vucic and Kurti had failed to do in two previous rounds of meetings.

The deal clears the way for “intense negotiations” to normalise bilateral relations that Kosovo and Serbia committed to in 2013, on the EU’s insistence, Bislimi added.

“The parties understand that all past dialogue agreements must be implemented,” Borrell underlined.

Vucic appears to u-turn on agreement

However on Thursday, despite the technical agreements reached in Brussels, Vucic claimed that the so-called ‘KM’ registration plates, issued to Kosovo Serbs in Mitrovica, north Kosovo, will remain remain in use.

Commenting that there are around 7,000 such vehicles in Kosovo and 2,000 in Serbia, Vucic said motorists will “continue to drive those cars without any problems and without any fines.

“It is so hard that 11 years after the stupid things you left us, we are still trying to fix them,” he added.

Dispute may roll on until West Balkans summit in two weeks

Borell said he will invite both parties “to normalise relations” in the days ahead and further discuss Serbia’s Chapter 35 procedure, which is a formal part of the EU’s accession criteria for joining the Union.

The further prospects for the south-eastern European countries joining the bloc will take place at the EU-Western Balkans summit in Tirana, Albania on 6 December.

Kosovo declared independence in 2008, and has since been recognised by over 100 countries, but not by neighbouring Serbia. NATO still keeps around 3,700 peacekeepers in the region.