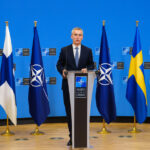 Share this article on:
Baltics News in brief Ukraine

NATO will increase its number of forces in the Baltic sea if Sweden applies to join the defence alliance, NATO Secretary-General Jens Stoltenberg announced on Thursday afternoon.

The NATO chief told Swedish SVT News that although NATO does not intend to enter the conflict between Russia and Ukraine – and therefore is not sending ground or airborne NATO forces to the latter country – its increased military presence in the Baltics, Poland, Romania will remain.

If Sweden makes an application to join the alliance, it could meanwhile expect an increased presence of NATO troops in the Baltic Sea, Stoltenberg told the Swedish state broadcaster, adding that any decisions would be made in consultation with Sweden.

Estonia, Latvia and Lithuania became NATO members in 2004. Sweden and Finland are expected to decide on whether to apply to join NATO later this month.

“We want a quick conclusion to the process itself,” Stoltenberg said. “It is up to each NATO country to decide for itself whether they want nuclear weapons in their country,” he added.