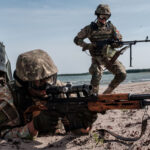 NATO leaders will formulate plans to bolster its eastern flank across Central and Eastern Europe at a summit in Madrid in June, Secretary-General Jens Stoltenberg announced.

Calling Russia’s invasion of Ukraine the “biggest security crisis in a generation”, Stoltenberg said “regardless of when, how, the war in Ukraine ends (it) has already had long-term consequences for our security”.

Since Russia’s invasion of Ukraine on 24 February, the Western defence alliance has sent an extra 40,000 troops to Estonia, Latvia, Lithuania and Poland, increasing its presence tenfold.

NATO needs to adapt to that new reality, and that’s exactly what we are doing,” he told UK conservative outlet The Daily Telegraph.

Noting Berlin’s recent commitment to increase its military expenditure from 1.5% to above 2% of GDP, Stoltenberg said his focus was “to ensure that those that are below 2% meet that minimum (NATO mandated) guideline.”

Following the “serious wake-up call” of Russia’s invasion of Ukraine in 2014, the Western defence alliance strengthened its borders on a scale unseen since the end of the Cold War, Stoltenberg said.