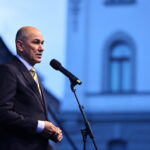 The Freedom Movement, which was established just less than a year ago, will hold 41 of the 90 parliamentary mandates in the upcoming term, as compared to Janez Jansa’s conservative Slovenia Democratic (SDS) party’s 27 seats.

While the SDS garnered 23.5% of the vote, down one percentage point, it gained two seats, as the number of parliamentary parties dropped from nine to five. Jansa congratulated Golob, and claimed that his SDS party will emerge from the election stronger.

The other House parties will be the New Slovenia Christian Democrats (with 8 MPs), the Social Democrats SD (7) and The Left (5) and the Hungarian and Italian minority parties (1 each), according to pollster Volitve. During the election campaign Golob said he would like to form a government with 60 MPs.

SD leader Tanja Fajon said her party will be a “stabilising factor in the new government to help ensure not just normality but also social justice and democracy”.

Diplomat Bozo Cerar told Slovenian outlet STA that the incoming government’s three main challenges will be the war in Ukraine, economic diplomacy and the country’s bid for a non-permanent seat on the UN Security Council.

The Chamber of Commerce and Industry expressed hope that the new ruling coalition will incorporate measures for improving Slovenia’s business environment into its founding agreement.

Jansa has been accused of threatening political and media rivals and cronyism since becoming PM for the third time two years ago.

Despite those accusations of attempts to “Orbanize” Slovenia, Jansa’s vociferous condemnation of Russia’s invasion of Ukraine in February differed from the Hungarian Prime Minister Viktor Orban’s “neutral” stance on the war.

Golob is no stranger to politics, the Hungarian state news agency MTI wrote, recalling his earlier positions at centre-left ministries. For more than a decade he led the state-owned electricity company (and) then decided to start politicking again, MTI added.

More than half of the Freedom Movement’s candidates were women, and the Slovenia Parliament is expected to have its highest proportion of female MPs since the country gained independence in 1990. Turnout on Sunday exceeded 68%, the highest for a Slovenian general election since 2000.