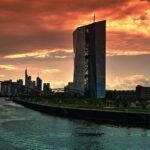 “The war in Ukraine is severely affecting the euro area economy and has significantly increased uncertainty,” Christine Lagarde, President of the European Central Bank (ECB), said after its Governing Council met on Thursday afternoon. ​​

The ECB restated its intention to conclude bond buying in the third quarter. With inflation at almost four times the ECB’s 2% target, coupled with threats to the Eurozone’s pandemic rebound, the central bank is contemplating gradual rate hikes after the termination of assets, Bloomberg wrote.

While the ECB is still well behind the Federal Reserve and the Bank of England at raising borrowing costs, the faster timetable for withdrawing stimulus unveiled in March underlines an increasing focus on taming price pressures, upside risks surrounding the inflation outlook have also intensified, especially in the near term, Bloomberg added.

The euro sank to USD 1.08, its lowest level against the dollar in almost two years on the news that the ECB was continuing with its plans to exit stimulus later in the year.

“The Euro depreciated by almost 10% against the dollar in the past 12 months due to an inactive ECB,” Holger Zschaepitz, an economist at German daily Die Welt, tweeted, noting that “This puts the Euro in a worse position than the Russian Ruble, which has lost only 8%.”

Speaking via a video link, Lagarde told journalists that the Governing Council had “judged that the incoming data since our last meeting reinforce our expectation that net asset purchases under our asset purchase programme should be concluded in the third quarter.

“Looking ahead, our monetary policy will depend on the incoming data and our evolving assessment of the outlook. In the current conditions of high uncertainty, we will maintain optionality, gradualism and flexibility in the conduct of monetary policy. The Governing Council will take whatever action is needed to fulfil the ECB’s mandate to pursue price stability and to contribute to safeguarding financial stability,” she said.

In response to Lagarde’s comment that “the ECB will complete asset purchases first, hike some time thereafter”, Zschaepitz commented that “‘Some time after’ can be anytime between a week and several months.”

Lagarde remains doveish however. “The impact of the war on the economy will depend on how the conflict evolves, on the effect of current sanctions and on possible further measures. Inflation has increased significantly and will remain high over the coming months, mainly because of the sharp rise in energy costs,” she said.

“We stand ready to adjust all of our instruments within our mandate, incorporating flexibility if warranted, to ensure that inflation stabilises at our two per cent target over the medium term,” Lagarde added.