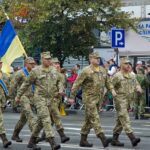 Representatives from Ukraine and Russia are scheduled to meet on Monday for another round of peace negotiations. Despite their earlier agreement to open up humanitarian corridors, Ukrainian civilians were not able to leave from Mariupol over the weekend; both sides blamed the other for the ceasefire failure.

As Russian forces allegedly increased the shelling of Ukrainian cities overnight, Ukrainian President Volodymyr Zelenskyy is asking the West for tougher measures against Moscow, pointing out in a video address that the present sanctions were an insufficient deterrent, after Russia’s Ministry of Defence said it would target Ukraine’s military-industrial complex with precision strikes, urging staff to leave.

The BBC reports that the price of oil (Brent crude) has skyrocketed to its highest level since 2008, trading at below USD 130/barrel in Asia after an earlier spike of USD 139/barrel. It writes that Russia’s invasion of Ukraine has disturbed energy markets, resulting in higher energy costs that are already being felt by global consumers.

Meanwhile, the United States is considering banning oil imports from Russia. US Secretary of State Antony Blinken explained to CNN, “We are now talking to our European partners and allies to look in a coordinated way at the prospect of banning the import of Russian oil.” US Secretary of State Antony Blinken told CNN. United States House of Representatives Speaker Nancy Pelosi confirmed that the US Congress is looking into legislation to “further isolate Russia from the global economy”, and is planning this week to send USD 10 billion in aid to Ukraine.

Moscow warns against getting involved in the conflict, while allies ponder loaning MIGs to Ukraine