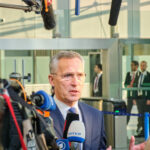 NATO representatives meeting on Thursday will consider boosting the strength of the defence alliance’s eastern flank even further given Russia’s ongoing invasion of Ukraine. While NATO has already bumped up troop numbers, which now number 40,000 on its eastern border, Bulgaria, Hungary, Romania and Slovakia could see new NATO combat units, according to a piece on EU Reporter.

Ahead of Thursday’s NATO summit, which will include US President Joe Biden, NATO Secretary-General Jens Stoltenberg said on Wednesday he expected leaders to green-light an increased presence “on land, in the air and at sea”.

EU Reporter notes that NATO’s existing combat units in the east comprise around 5,000 troops, which had been sent to Poland and the Baltic states in 2014 when Russia annexed Crimea.

Providing Kyiv equipment against chemical, biological, radiological and nuclear attacks is also on the Summit’s agenda. Yesterday, Stoltenberg warned Russia against using such weapons in Ukraine.

Before his attendance at the Summit, Romania’s President, Klaus Iohannis, said NATO had already approved the battle group to be stationed in his country, writes Nine O’ Clock. French NATO troops will be providing the framework for the group, he said, the deployment of which he called a “good start”.

“I will still insist that the Eastern Flank of NATO must be better consolidated,” stated Iohannis. “We have at this time all sorts of formats, forward presence, tailored presence. I believe we must be aware where the aggression comes from, the aggressor is Russia, and we should build a very solid and serious defence on the Eastern Flank.”

According to Nine O’ Clock, President Iohannis repeated on Thursday that Romania is, however, not in danger – and he sought to addresss Romanians’ concerns.

“We are part of the largest, strongest defence alliance that has ever existed. Our soldiers are well trained,” he said, adding “I can say wholeheartedly that Romania is not in danger, the Romanian people are safe through our armed forces and NATO.”

When President Biden meets with his Romanian counterpart and other leaders of NATO members, the US is scheduled to introduce new sanctions against Russian oligarchs and political figures, and discuss European energy supplies, according to the Guardian, which also reports that Ukraine says today’s Nato, G7 and EU meetings will show clearly who Kyiv’s friends and foes truly are.