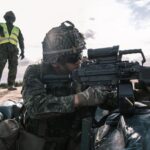 US to lead NATO war games in Latvia

US to lead NATO war games in Latvia

The Latvian Defence Ministry has revealed that 400 US troops, 100 units of military vehicles and 22 US Apache helicopters will arrive to the Baltic country by Wednesday to take part in an international military drill. Large numbers of NATO troops will also arrive into the Central and Eastern Europe (CEE) country for military exercises that will include the Latvian Army, bnn-news.com reported.

On Wednesday, one hundred Italian troops will arrive in Latvia, according to the latter country’s defence ministry. Friday will then mark the commencement of the Saber Strike 22 international war games under US command that will run until 23 March. Around 800 US troops and up to 250 military vehicles will arrive from neighbouring Lithuania by 28 February.

Overall some 2,800 troops and National Guard from Latvia and the US will participate. NATO forces from CEE countries Poland, Czechia, Slovakia, Slovenia, Montenegro and Albania will be joined by forces from Canada, Italy, Iceland and Spain. The presence of allied forces in Latvia will demonstrate the combat readiness of NATO member states and reinforce its collective defence principles through deterrence. More than 700 US troops and more than 20 US Army and Air Force military units will be staying in Latvia for the duration of exercises, bnn-news.com added.