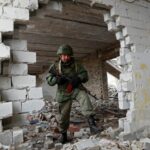 There are no winners in war, but it does matter who loses: history turns on it – CET

There are no winners in war, but it does matter who loses: history turns on it – CET

The war in Ukraine is a further nail in the coffin of the Pax Americana. Donald Trump began the dismantling of the US-dominated world order and post-WWII security apparatus, and now the job is being completed by Joe Biden.

After last year’s withdrawal from Afghanistan, the Western response – or lack thereof – to Russia’s invasion of Ukraine has made the situation abundantly clear. The US and its Western Alliance are as incapable of defending the post-WWII world order as of protecting their own allies. The US, which in the 1990s destroyed the Iraqi army after the occupation of Kuwait, two decades into the 21st Century, is all talk.

Of course, Russia is not Iraq and war with a nuclear power is no one’s idea of common sense. Similarly no one wanted a war with Germany on the eve of World War II and the world watched on as it made the Anschluss with Austria and then annexed part of Czechoslovakia. Germany gained momentum, only strengthened by these concessions, eventually leading to a longer, more painful, war. The cost of that delay was tens of millions of lives.

Putin may stop here, meaning the weakness of the West may save lives. Perhaps not. The world is learning to take seriously not the empty threats of the West but of those violent enough to carve up the world in their own image. The US has also shown China what to expect if it on day decides to militarily assert its claim to Taiwan: sanctions. Although of course only in moderation, as the economy must roll on.

The US Secretary of State was only brave enough to invite Putin to occupy Ukraine by standing up for its potential NATO membership. As the country is actually not a member, he can now look the other way. The unconvincing resolutions and pledges of Western leaders such as UK Prime Minister Boris Johnson, seem to serve as proof rather than rebuttal of a weakened West.

Meanwhile as war coverage reaches us, we push for the punishment of Russia’s insane dictator, for proof that good ultimately conquers evil and that the US is not run by clowns and salesmen.

But if it is not desire that speaks for us, we must see that Putin matters. In the face of a paralysed West, he can do whatever he wants. This version of the West will come as no surprise, not to him. The West will not go to war over a 44 million-strong democracy in the heart of Europe, as it did over Kuwait, a four-million population, semi-constitutional emirate serendipitously situated on the world’s sixth largest oil reserve. Even when the war has already begun, regardless of us, and with casualties and long-term consequences.

The West pretends to be sidelined and that economic sanctions equate to the bloody occupation of a country. Sanctions, which, of course, must not unduly harm economic interests. After all, the world’s economic circulation must not be jeopardized and Russian gas and oil make the world go round.

The war will end soon, and Putin – unless he has entirely taken leave of his senses – will not bid for the whole of Ukraine. Merely half of the country, with a new border along the Dnieper River, may suffice, and Putin can graciously return the other half of the country, offering the West something to win – or to pretend to have won. There are no winners in war, but it does matter who loses: history turns on it.

As West tightens screws on Moscow, CEE countries hunker down