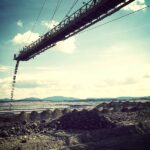 The Czech Republic and Poland made good today on promises made in yesterday’s settlement of the Turow mine dispute. Polish Prime Minister Mateusz Morawiecki confirmed that Czechia withdrew its complaints regarding the Polish mining operation to the Court of Justice of the European Union, while Warsaw had already paid out EUR 45 million in compensation to fund environmental safeguards for Czech communities at the border of the facility, yesterday.

“The Czech Republic has withdrawn its complaint to European institutions and that is the end of this issue,” he said.

Czechia and Poland signed an agreement regarding the environmentally damaging lignite mine in western Poland, on Thursday. Poland agreed to cough up EUR 45 million towards new infrastructure in Czech regions over the border from the facility, and also monitor the mine, build groundwater barriers and establish a ‘project fund’.

Legal experts, activists and green groups, however, are not on board with the deal. Milan Starec, a Czech activist living near the mine told Euractiv, “The Czech government hastily and secretly approved a raw deal because it apparently has no time to comply with the law.” Legal experts, meanwhile, say the bilateral agreement ignores EU environmental law, while the Czech Geological Survey says groundwater levels will not improve by building the proposed barrier.

The agreement between Prague and Warsaw means that mining at the Turow facility, which sits near Poland’s tri-border with Czechia and Germany, can continue. Before the two sides reconciled on the matter, an EU court stated yesterday that Poland’s extension of the mine’s operating permit had lacked an environmental impact report, and was therefore illegal.

The recent appointment of Czechia’s new Prime Minister Petr Fiala gave Warsaw a new opening to try and settle the row with Poland, which has been lodged in a legal dispute with the EU over Turow since 2020. Czechia filed its complaint with the European Court of Justice in February 2021, with the EU’s top court demanding Warsaw shut down the mine, but its operation continued. The court then issued a daily fine of EUR 500,000, which Poland has been ignoring for months.

Today, Prime Minister Morawiecki said Poland would use “all available ways of appeal” to avoid paying what he called “this extremely unjust penalty,” and questioned if other European prime ministers would shut down a mine and power plant that served several million people if an authority in Luxembourg ordered them to.

Hydrogen: a clean energy for the transition