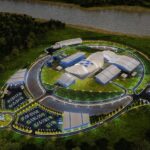 Romania could become the first country to deploy a small modular nuclear reactor (SMR), according to an agreement between the country’s state-owned nuclear energy producer Nuclearelectrica and US energy firm NuScale Power. Romanian President Klaus Iohannis and US special presidential envoy for climate John Kerry made an announcement to this effect on the sidelines of the COP26 climate conference in Glasgow, Scotland.

Romania is taking “a huge technological leap” in advancing climate action and clean energy access, the US State Department said in a statement. By deploying US innovative clean technology, Romania will partner with NuScale to build small nuclear reactors as part of an effort to increase low-emission power sources, it added.

Romania’s Nuclearelectrica currently operates two 706MW reactors at the country’s only nuclear power plant in Cernavoda, producing around one-fifth of its power. The state company has plans to add two more reactors. The deal announced now is a different one: with NuScale, Romania intends to build a six-module plant.

Advocates of SMRs argue that they are much less likely to overheat, in part as they generate lower temperatures than large reactors. SMR technology can also reduce engineering risks such as coolant pump failures. However no country has licensed an SMR to date. NuScale is the first SMR to receive design approval from the US nuclear regulatory commission, although a pilot project in the US state of Idaho was recently reduced from twelve to six SMR reactors, with a post-2030 completion date. The US firm is also discussing SMR development deals with Bulgaria and Poland.

The EU has not yet approved SMR technology, however, and industry observers say Romania could be being used as a guinea pig for insufficiently tested nuclear technologies. Around 66% of Romanians oppose the idea of a nuclear plant being built in their neighbourhood, according to a YouGov poll published in October.