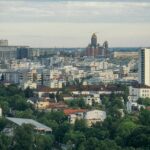 Although the country is now exiting a period of crippling political inaction, Ciuca inherits a number of urgent issues, notably Romania’s disastrous COVID-19 situation, soaring inflation and the delayed implementation of an EU-funded economic recovery plan. Ciuca plans to increase funding for pensions and health care via budgetary amendments on Friday. “We will do everything possible to put citizens back in focus… please allow us to get to work,” Ciuca said.

The PNL and PSD will each hold nine of the 21 ministerial posts, and the UDMR three. As the choice of the National Liberal Party, Prime Minister Ciuca will serve as premier for 18 months before passing the baton to Social Democrat leader Marcel Ciolacu until elections are expectedly held in 2024. Ciuca was the third candidate proposed to lead the country in the aftermath of the collapse of Florin Citu’s PNL-led government on 5 October.