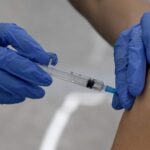 Latvia has announced a month-long COVID lockdown after a surge in infections and hospitalisations, becoming the first EU country to reintroduce the strict conditions in place across much of Europe earlier in the year. In the early days of the Coronavirus pandemic, Latvia received praise for its successful response. However the full-vaccination rate of Latvia’s 1.9 million residents is only 57%, as compared to the EU average of 74%, and Prime Minister Krisjanis Karins said on Monday that this accounts for its surge in hospitalisations.

There are currently two pockets of Eastern Europe currently experiencing the severest COVID case rates. The first is the three Baltic states – Estonia, Latvia and Lithuania – which have suffered Europe’s highest rates over the last two weeks. The second, southern pocket, also comprises three countries: Serbia and its neighbours Romania and Montenegro, according to Johns Hopkins University (JHU) aggregate data, which classifies the most severely hit countries as those with fortnightly case rates above 6,600 per million.

Estonian Prime Minister Kaja Kallas on Wednesday announced restrictions, which she described as “necessary for preventing further escalation of the health crisis”.  The tighter rules include mandatory medical-mask-wearing inside public venues, increased social distancing, teleworking where possible and mandatory COVID certificates for participation in social events. Estonia has also upped financial support to hospitals and medical centres, and its national vaccination campaign.

Meanwhile Romania’s intensive care units are packed beyond capacity, as over 19,000 new COVID infections and 574 deaths were recorded on Tuesday. Romania’s numbers have remained on a catastrophic plateau, reportedly due to widespread’ vaccine scepticism and an inoculation rate of around 30%.