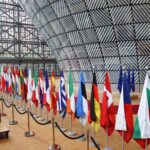 The East-West divide will be conspicuous on the agenda when EU heads of state and government gather at the bloc’s formal summit in Brussels on Thursday. While Hungary and Poland dispute the suspension of COVID recovery fund disbursements, the Western and Nordic European countries are pushing for the EU to adopt a stronger stance at the COP26 UN climate summit in Glasgow from 31 October- 12 November.

A core EC task of recent years has been negotiating third-party trade deals for the EU member states. However the EP is increasingly reluctant to approve such trade agreements, the most recent examples being the deals with China and the Mercosur countries of Central and South America. Numerous recent sticking points have included the green and human-rights issues and disagreements on trade regulations. Western and Nord Europeans generally want guarantees that European human rights and environmental standards will be upheld in trade agreements, while Central and Eastern Europeans are more inclined to endorse “free trade” and protectionist measures.

Despite the continent-wide vaccine buying deals, a number of Central and Eastern European (CEE) countries are way behind in pandemic handling, due to weaker public health policy measures, slower vaccine roll-outs and lower public trust in COVID jabs. The EU summit draft reminds CEE governments that “in order to further increase vaccination rates throughout the Union efforts to overcome vaccine hesitancy should be stepped up, including by tackling disinformation”. This is particularly timely as COVID fatalities in Romania have climbed to over 500 per day, while vaccination rates remain low in several CEE countries. The summit document will call for mutual recognition of vaccine certificates, sending a message to the US to reciprocate the courtesy the EU extended to its Western ally in the summer. Heads of states will also advise the easing of travelling restrictions and the full opening of Schengen borders.

Eastern European governments routinely blame Western Europe and the EU for soaring natural gas and electricity prices, although these dividing lines are not exclusively between the older and newer member states. The EC’s “energy price toolbox” as presented last week will form the basis of the talks. However, objecting to the hefty energy price rises, Poland called the EU ahead of the summit on Monday to request a delay or cancellation of plans to tackle climate change.

In a position paper, EU member states that primarily rely on Russian gas and fossils fuels, as led by Poland, want the EU’s proposal to launch a carbon market for transport and buildings to be removed from the “Fit for 55” package. Poland and Hungary argue that the policy would cause drastic consumer utility bill rises. Likewise, the Polish-led paper asks the EU to maintain its minimum energy tax rate.

According to the EU summit draft conclusion, as seen by CET, the EU will urge member states to “implement ambitious national targets and policies. It urges in particular major economies that have not yet done so to communicate or update enhanced and ambitious nationally determined contributions in time for COP26 and to present long-term strategies towards reaching net zero emissions by 2050.” On climate-transition-financing, the document reminds EU countries of the importance of scaling up climate financing pledges and warns developed countries to increase their contributions to reach the annually USD 100 billion financing goal agreed in Paris in 2015.