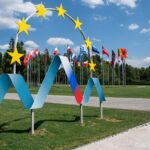 Today, 1 July, Portugal is handing over the rotating presidency of the Council of the European Union to Slovenia, which will hold the position for 6 months. Covid-19 economic recovery coordination, an asylum and migration reform package, and accession for the Western Balkan countries are leading topics on Slovenia’s political agenda.

The former Yugoslav state also celebrates the 30th anniversary of its independence on this day.

Slovenia’s president, Borut Pahor, made headlines in May with his call to speed up the accession of all western Balkan countries – Albania, Bosnia and Herzegovina, North Macedonia, Montenegro, Serbia, Kosovo – suggesting that it would provide a strategic answer to what he said were current challenges, and through the expansion, tackle a number of key issues for the European Union, like sour relations with Russia and Turkey, or addressing China’s attempts to gain geostrategic influence through infrastructure investments in the region.

Last week, Slovenia’s Foreign Minister, Anze Logar, presented the presidency priorities under the motto “Together. Resilient. Europe.” The program will be based on four pillars:

· Resilience, recovery and strategic autonomy of the European Union

· Conference on the Future of Europe

· A union of the European way of life, the rule of law and equal criteria for all

· A credible and secure European Union, capable of ensuring security and stability in its neighborhood

This is the second time since its accession in 2004 that mountainous Slovenia, with a population of 2 million, heads the Council as president. The country’s diplomatic corps in Brussels will be busy with the Recovery Mechanism and the Next Generation EU Recovery package, focusing on green and digital transitions. Ljubljana will also continue ongoing work on Future of Europe discussions.

Meanwhile, Slovenia’s populist, right-leaning prime minister, Janez Janša, will have to make progress in strengthening the rule of law, including moving forward on the Article 7 procedures against Ljubljana’s key allies, namely Hungary and Poland. An asylum and migration package will also be debated in the Council in the second half of 2021, too, a topic the Slovenian government is keen to make progress on.

At a presentation of priorities for Slovenia’s presidency, foreign minister Logar told the press: “The success of the Slovenian presidency, as well as of the European Union as such, depends on joint efforts by the member states and European institutions to seize the opportunity and improve the Union’s functioning before future crises. At the same time, let us make sure that we can successfully face the current economic, social and also geostrategic challenges.”

Regional interests high on the agenda

An EU-Western Balkans summit on 6 October will be the highlight of the Slovenian presidency’s enlargement efforts, which entail the challenging task of making progress after 18 months of stalled talks. Specifically, they need to conclude the Bulgarian – North Macedonian dispute mainly over cultural issues and address Sofia’s insistence in recognizing the Macedonian language only as a dialect of Bulgarian and not as another EU language.

As the accession talks with Albania are effectively linked with North Macedonia’s, the whole process has been stuck since before Covid-19 locked down of Europe. Similarly, Serbia has been unable to open any new chapters in its accession negotiations with the EU since the beginning of 2020.

For more about the program and priorities of the Slovenian EU presidency, click here.

Caged-animal Farming to be Outlawed by the EU