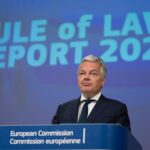 EC Justice Commissioner: Hungary’s Recovery Funds Frozen July 20, 2021 < 1min read There are systemic problems with the rule of law in Hungary, so the European Commission is use its legal toolkit – including the freezing of EU funds for the country – in defence of democracy – according to Didier Reynders, EC commissioner for justice. Speaking to three media outlets (Hungary’s EUrologus/HVG, Politico Europe and Slovenian Delo daily) Reynders said, the European Commission won’t approve the Hungarian EU recovery COVID-19 recovery fund plans until the Orbán government implements judicial reform and provides adequate guarantees that corruption cases uncovered by the European Anti-Fraud Office (OLAF) are thoroughly investigated by national authorities.

The justice commissioner spoke about Hungary ahead of a presentation of the EU’s annual rule of law report published on Tuesday which surveys the rule of law situation in all 27 member states in the following key areas: the independence of the judiciary, fight against corruption, diversity of the press and how well the system of checks and balances functions.

The latest edition of the rule of law report puts a lot of emphasis on how democratic values and fundamental rights were respected by governments during the pandemic. Hungary is entitled to receive HUF 2,511 billion in non-refundable funds, the first tranche of which, HUF 326 billion, would arrive within a few weeks after the approval of the member states. If the Hungarian plan is not included in the agenda of the meeting of finance ministers for July the 26th, a decision on it may be made in September at the earliest.

Poland was given a Deadline to Comply with European Court Rulings