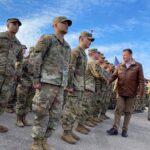 As President Vladimir Putin’s invasion of Ukraine nears its first anniversary and Russia regroups, the defence sector politics of Central and Eastern Europe are also in transition.

Fighting is moving to the flatter eastern Donbas region, in the wake of Russia’s retreat from the outskirts of Kyiv. To gain control of the east of the country, Ukraine will need modern battle tanks. It is Poland who has taken the lead on this new phase of the war.

On Wednesday, 11 January, Polish President Andrzej Duda announced the country’s intention to send a “company” – i.e. around a dozen – of Leopard 2 battle tanks to Ukraine, at a meeting with Ukrainian President Volodymyr Zelensky and his Lithuanian counterpart Gitanas Nauseda.

This represented a watershed moment for European security: not only because several countries will now follow suit – Ukraine Minister of Foreign Affairs Dmytro Kuleba has said five countries are now ready to – but also as it marks Poland becoming a major player in regional military affairs.

“The pressure must remain constant,” Polish Prime Minister Mateusz Morawiecki said at the weekend, when he announced that he will meet German Chancellor Olaf Scholz to persuade him to send Leopard 2s, which are made in Germany, to Ukraine, in Berlin on Monday.

When Poland upgraded its Soviet-era t-72 tanks with around 250 Leopard 2 vehicles in the 2000s, it was acknowledging the chance of a land invasion in Europe, something which other countries considered unlikely and anachronistic.

Moreover, Poland’s  PiS government has pledged to double that number of troops by 2035. By way of comparison, Germany’s army currently has 170,000 soldiers.

Poland also has more tanks and howitzers than Germany, and is investing heavily in its military. As Poland’s Army Chief of Staff Rajmund Andrzejczak put it, “we just took our suitcases with money… around the world… trying to buy.”

In the years immediately before Russia’s invasion of Ukraine, Poland was already modernising its military, buying 32 F-35 joint strike fighter in 2019 for over USD 6bn.

The country is currently at odds with the EU, which has suspended billions in payments over concerns about the rule of law and judiciary in the country.

“We are ready to buy arms in other EU countries but they need to stop their war against Poland,” ruling party PiS chairman Jaroslaw Kaczynski said in November.

Consequently, Poland has continued to look beyond Europe for weapons and military hardware, and has ordered aircraft, 1,000 K2 tanks and 600 K9 Howitzers from South Korea, at a cost of over USD 10bn.

Poland returned to the US in August 2022, to sign a USD 1.15bn supply contract for 250 Abrams battle tanks, a move which will potentially free up more tanks to Ukraine, to where Poland has already dispatched more than 230 t-72s.

On Sunday, 8 January, Poland’s Defence Minister Mariusz Blaszczak approved a concept to create the 1st Legions Infantry Division, a fifth division named after the Polish First Brigade of the Polish legions that existed from 1914-17.

Despite that nod to the past, in contrast to Germany, Poland is determined to become a major military power in the future.

Since Scholz announced a USD 100bn defence fund three days after Russia invaded Ukraine, politicians in his three-party coalition government have dithered on how to renew the country’s military.

On Monday, 16 January, German Defence Minister Christine Lambrecht resigned, after months of criticism, most importantly a perceived failure to efficiently oversee the EUR 100bn upgrade to the country’s armed forces.

“Today I asked the chancellor to dismiss me from the office of federal minister of defence,” said Lambrecht, who is a member of Scholz’s Social Democratic Party.

UPDATE: This article has been updated to include comments by Polish, German and Ukrainian government officials.