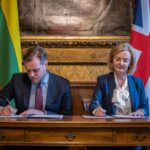 Lithuania allowing Taiwan to open a ‘Taiwanese Representative Office’ in its capital Vilnius “gave China reason to go all-out against us”, Lithuanian Foreign Minister Gabrielius Landsbergis says in an interview with the right-wing UK magazine The Spectator.

Beijing withdrew its ambassador and blocked imports from Lithuania, deleting it from its customs system, the conservative weekly notes, adding that the EU launched a WTO case against China, but concerns about Lithuania’s actions were raised in some quarters, including by the German business lobby.

‘Our trade with China has been cut to basically 0.3% of what we had,’ the centre-right politician says.

Landsbergis was visiting the UK to meet Foreign Secretary Liz Truss, who has pushed the idea of strengthening relations with the Baltic states Lithuania, Estonia and Latvia, as part of a so-called “network of liberty”.

According to Landsbergis, “It starts from the question: will the global security order remain the same as it was before 24 February, and people in Lithuania, in the Baltics or in the broader eastern flank of NATO would agree that it cannot.”

Truss and Landsbergis signed a joint declaration to increase bilateral security and economic cooperation on 23 May.

“It’s no secret that, after Brexit, there were a lot of questions: can Britain find its path again? What would it be?” Landsbergis says. “Britain has proven, throughout the last three months, that it’s ready to take on leadership in a changing geopolitical situation,” he says, adding that he finds calls for a ceasefire in Ukraine “worrying”.

“We’re hearing advice from certain leaders – western leaders – that there has to be a ceasefire. That we need to save Putin’s face, and all that. If we allow or force Ukraine to cede territory in order to save an aggressor’s face, that spells trouble for the rest of us.

“What if somebody asks Taiwan to save one of the Chinese leaders’ faces, or asks a NATO country like Lithuania to save the face of whoever would be an aggressor and let them seize territory?

“We will be defending the principle of sovereignty and territorial integrity of whichever country is attacked and it has a right to defend it and we will help the country to defend it,” Landsbergis underlines.