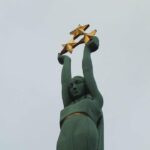 People supporting war crimes can have their citizenship removed in Latvia as of today, after a large majority of the country’s MPs voted in favour of amendments to the Citizenship Law on Thursday.

Latvia’s Defence, Internal Affairs and Corruption Prevention Committee passed the amendments, a response to Russia’s ongoing war in Ukraine, on Tuesday. The amendments were supported on Thursday by 62 MPs, while 14 abstained and Julija Stepanenko cast the sole dissenting vote, website lsm.lv reported.

Stepanenko and all of the abstainees are members of the social-democratic Saskana (Harmony) party, which represents Latvia’s Russian minority.

Under the new amendment, the criminal activity is defined as participation in genocide, crimes against peace or humanity, or war crimes that undermine or threaten the territorial integrity, sovereignty and independence of a democratic state or Constitution.

As a result, from today, supporting criminal states or individuals with significant financial and material means, as well as propaganda or technology, will be punishable in the small Baltic country.