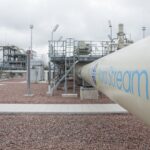 Deutsche Bank CEO Christian Sewin said on Monday that a significant recession in Germany would be “almost inevitable” if imports of Russian oil and natural gas were stopped.

German banks are expecting the country’s GDP growth to slow to 2% in 2022 from 2.7% in 2021, in the wake of Russia’s invasion of Ukraine. However Europe’s largest economy has come under further pressure to ban Russian energy imports after Ukraine this weekend accused Russian forces of killing 300 civilians in Bucha, near Kiev.

There are conflicting views regarding energy sanctions in the German coalition government, which formed late last year. After footage of apparent atrocities in Bucha appeared, Germany’s Defence Minister Christine Lambrecht on Sunday said the EU must discuss banning the import of Russian gas.

However Economy Minister Robert Habeck said that following day that he opposes an immediate ban on Russian fossil fuel imports, having said in late March that Germany will wean itself off Russia gas by 2024. “We are working every day to create the preconditions and the steps toward an embargo,” Habeck said on Monday. For his part, German Chancellor Olaf Scholz said in March that “Europe’s supply of energy for heat generation, mobility, power supply and industry cannot be secured in any other way”.

The differences of opinion in German business and political circles betray a country struggling to adjust to new political and security realities for Europe after decades-long bilateral connections, which predate German unification.

In 1970 West Germany agreed to extend the Transgas pipeline, itself an extension of the Soyuz pipeline, through what is now Czechia. DW describes this as “a significant fork in the road of the Cold War”, as it established economic cooperation between Russia and western Europe. Since then Russian gas has powered German homes and businesses for over 50 years, establishing “deep economic ties between the two countries”, Deutsche Welle noted.

In 2020 Germany received almost 20% of Russia’s gas, comfortably making it its biggest customer, according to official Russian export data. Russian gas accounted for 55% of Germany’s gas imports in 2021, and 40% in the first quarter of 2022, Reuters reported.

However the Baltic states seem more resolute on ending their dependency on Russian energy. Lithuania, which was heavily reliant on Russian gas as recently as 2014, announced at the weekend that it was ending all such imports. “From now on, Lithuania won’t be consuming a cubic cm of toxic Russian gas,” Lithuanian Prime Minister Ingrida Simonyte tweeted on Sunday, adding that her country had become the first EU member state to do so.

Lithuania opened a liquid natural gas (LNG) terminal, in Klaipeda, in 2014. While its Baltic neighbours Latvia and Estonia have no such facility, plans are afoot to build one in partnership with Finland. Meanwhile Latvian energy officials have said they will rely on national gas reserves, rather than importing from Russia.

The US has agreed to boost its shipments of LNG to Europe by 70%, aiming to supply 50 billion cubic metres per year until at least 2030. But, France24 notes, that would still only be a third of what Europe imports from Russia, meaning other sources will be needed too.