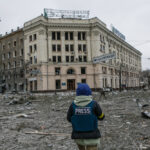 Delegations from Ukraine and Russia were unable to broker a 24-hour ceasefire in their meeting on Thursday morning in Turkey. While Ukraine’s Foreign Minister Dymetro Kuleba said such a ceasefire would be necessary for urgent humanitarian issues, his opposite number Sergei Lavrov commented after their meeting the West’s behaviour of supplying Ukraine with weapons was dangerous. Explaining that Moscow’s “special military operation” was proceeding as planned, he said “We are not planning to attack other countries and we did not attack Ukraine either, we were just dealing with the issues there.”

Having initiated their meeting, Turkey’s Foreign Minister called it “civil” and “an important start”.

Al Jazeera reported that because Russian forces did not respect a temporary ceasefire on Thursday no civilians were able to leave Mariupol, even though a Russian Defence Ministry spokesman said that no targeting missions were carried out there. He referred to the bombing of the children’s hospital on Wednesday as a “staged provocation” “for a Western audience”.

Resolving the war must involve negotiations between Moscow and Kyiv, German Chancellor Olaf Scholz and French President Emmanuel Macron told Russian President Vladimir Putin in a call on Thursday. Macron and Scholz said an immediate ceasefire in Ukraine was a must.

No civilians have been able to leave the encircled port city of Mariupol as Russian forces failed to respect a temporary ceasefire to allow evacuations, Ukraine’s Deputy Prime Minister Iryna Vereshchuk said on national television. The Guardian writes that the Red Cross is reporting that hundreds of thousands of people in the besieged Ukrainian port city have absolutely no food, water, heat, electricity, or medical care, calling it an “increasingly dire and desperate” humanitarian situation.

Meanwhile, 12,000 civilians were able to depart the Sumy region in the north-east, and 2,000 people were evacuated from Isyum in the east of Ukraine.

More than half of the Ukrainian capital’s population of 3.5 million has reportedly left Kyiv, reported mayor Vitali Kitschko, who said nearly 2 million city residents had fled.

It was bad news for Russian oligarchs with business interests today in the UK, which put six more on the country’s sanctions list including Chelsea Football Club owner Roman Abramovich, who the government describes as a “pro-Kremlin oligarch”.

And the first major Wall Street bank announced that due to “compliance with regulatory and licensing requirements” it was shuttering its operations in Russia: Goldman Sachs Group Inc.