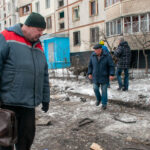 Ukraine’s President Volodymyr Zelensky is calling Russian forces bombing on Wednesday of a 600-bed children’s and maternity hospital in the port city of Mariupol “genocide”. Ukrainian authorities say the facility has been “completely destroyed” – 17 people were wounded, writes the Guardian.

“Hospitals and schools are destroyed. Churches and ordinary buildings are destroyed. People are killed. Children are killed. The aerial bombing of a children’s hospital is the ultimate evidence that genocide of Ukrainians is happening,” Zelensky said in a message on social media, also reiterating his call for a no-fly zone over Ukraine.

“Civilians are paying the highest price for a war that has nothing to do with them,” said United Nations Secretary-General Antonio Guterres. “This senseless violence must stop. End the bloodshed now.”

In Mariupol, 400,000 civilians have been trapped without food, water and electricity, and across Ukraine, shelling has impeded mass evacuations of civilians according to the Ukrainian authorities.

In Washington, the US House has approved USD 13.6 billion in aid to Ukraine and its allies in Europe, with the bill moving on for a vote in the Senate in coming days. USD 6.5 billion will go to sending troops and armaments to the region’s allied forces, while USD 6.8 billion is to help allies take care of refugees and is aimed at enforcing economic sanctions against Russia, writes the Guardian.

Al Jazeera reports that the IMF has approved USD 1.4 billion in emergency funding for Ukraine to cover immediate costs and assist the country’s economy in dealing with the invasion’s economic effects. IMF Managing Director Kristalina Georgieva said after hostilities there are over, the country will likely need serious financial support.

Ukraine’s Foreign Affairs Minister, Dmytro Kuleba, has arrived in Antalya, Turkey, where he will meet on Thursday with Russian Foreign Minister Sergei Lavrov for peace negotiations. The BBC writes that the countries’ senior diplomats were invited by Turkey’s Foreign Minister Mevlut Cavusoglu.