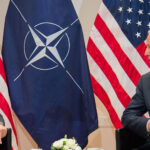 Share this article on:
Economy News in brief Russia Ukraine

US troops will not fight in Ukraine, but would defend “every inch of NATO territory” US President Joe Biden said on Friday. “A direct confrontation between Nato and Russia is World War III,” wrote Biden on Twitter.

Russia attacked cities across Ukraine on Friday. Russian forces incessantly bombarded the northeastern city of Kharkiv, according to its mayor, while a huge Russian military convoy positioned outside of Kyiv has dispersed, according to an American satellite-imaging company. A psychiatric hospital near the town of Izyum was bombed, but there were no casualties among the 330 people inside who took refuge in a bomb shelter.

The UN’s disarmament chief countered an allegation by Russia that Ukraine has a biological weapons programme, which Kyiv also denied. Meanwhile, Ukraine accused Russia of bombing settlements in Belarusian settlements from Ukrainian airspace.

According to the BBC, the UN’s human rights office (OHCHR) says since the invasion started 564 civilians have died, 41 of them children, although the actual death toll is likely much higher.

As punishment for invading Ukraine, Russia is poised to lose it’s “most favoured nation” trade status if the US, G7 and the EU have their way, writes Al Jazeera. That means those countries would be able to slap tariffs on many Russian goods, another way of increasing economic pressure on Moscow.

President Biden said, “”We’ll continue to squeeze Putin – he is the aggressor, he must pay the price.”

The US also announced Friday it was banning imports of Russian seafood, alcohol and diamonds.