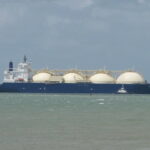 The United States agreed a deal on Friday with the European Union to provide the bloc with an additional 15 billion cubic metres (bcm) of natural gas this year to reduce the proceeds received by the Kremlin from energy exports to Europe. The liquefied natural gas (LNG) shipped from America will replace shipments Europe receives from Russia, which is about 10% of all of Russian gas imports to the EU. According to the Guardian, Russia supplied about 155 bcm of gas to Europe last year and typically accounts for about 40% of the continent’s demand.

European Commission President Ursula Von Der Leyen said the EU has an overall goal of helping member states secure a total of 50 bcm/year of US LNG by 2030, writes Al Jazeera. She and US President Joe Biden said they would set up a trans-Atlantic task force to implement a plan for decreasing the EU’s dependency on Russian gas imports, also promoting green and energy efficient technologies and adopting renewables in line with the EU’s net-zero climate goals, according to EU Reporter.

“I know that eliminating Russian gas will have costs for Europe,” said Von Der Leyen, “but it is not only the right thing to do from a moral standpoint, it will also put us on a much stronger strategic footing.”

The Guardian notes that for the plan to work Europe will need to build new LNG import terminals to accommodate additional deliveries, pointing out that Europe’s largest economy, Germany, has no such facilities.

Meanwhile, Al Jazeera reported that Germany intends to cut its dependence on Russian oil by half this summer, and will totally cease imports of Russian hard coal by the fall (according to Der Spiegel).