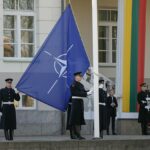 NATO has sent troops to Lithuania, which the country’s head of state says should be permanently stationed in the Baltic country. A rotating contingent of soldiers “would be the best boost to security and deterrence that NATO could provide – not only to Lithuania, but to the whole region”, President Gitanas Nauseda said, on the arrival of a German-led NATO battle group, which will send 350 more soldiers. Some 500 US troops have been deployed to Lithuania since 2019 in anticipation of military aggression from neighbouring Russia.

The US also plans to send 3,000 troops to Poland and Romania and to deploy more forces to the Baltics if Russian military forces stay in Belarus following scheduled manoeuvres. Romania’s President Klaus Iohannis will hold talks with NATO Secretary General Jens Stoltenberg on Friday. The two will visit a military base near the Black Sea, to which one thousand US soldiers will arrive from German bases. More troops and armaments are reportedly on their way. Iohannis called the reinforcements “required”, and said Romania was ready to “fulfil its commitments”.

Russia has amassed a total of 130,000 troops in Belarus and near its border with Ukraine since December – about 70% of what is required for a full-scale invasion of Ukraine, according to the US. The US has responded by sending reinforcements to Central and Eastern Europe (CEE), as well as warships and aircraft, to NATO allies.

Biden discussed in December the threat of a possible Russian attack on Ukraine with CEE leaders from Bulgaria, Czechia, Estonia, Hungary, Latvia, Lithuania, Poland, Romania and Slovakia. He pledged to bolster US military presence within the territories of the NATO allies and reportedly offered reassurances that they would be involved in negotiations with Moscow. In talks with President Vladimir Putin two days prior, Biden promised crippling sanctions on Moscow if Russia invades Ukraine.

However, not all members of the NATO alliance are on board with hosting additional US troops. This week Hungary’s Foreign Minister Peter Szijjarto said his country has declined to host additional US forces, given that its own troops were part of NATO and ready “to guarantee the country’s security”.

Szijjarto told Euronews that the US, Europe and Russia should continue negotiations to avoid war, which would have severe consequences for the region. “We have to invest in diplomacy (and) dialogue,” he said. “That’s why we urge the Russian Federation and our Western allies, the big countries, the strong countries, not to give up hope of peaceful settlement. To the contrary – to talk to each other – because once again, I want to underline that for us, rather small Central European countries, it can be extremely dangerous if violent action take place.”

Hungary’s Prime Minister Viktor Orban spoke with Putin for almost five hours in Moscow on 1 February, negotiated a gas supply extension and discussed the tense international situation. “I would like to reassure you that none of the leaders of the EU and its member nations want a war,” Orban said.