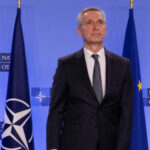 Following Russia’s attack on Ukraine on Thursday morning, Poland, Estonia, Latvia and Lithuania all invoked the NATO alliance’s Article 4, which obliges all 30 NATO members to hold a consultation when “the territorial integrity, political independence or security of any of the parties is threatened”.

Explaining the rationale for triggering Article 4, Estonia’s Prime Minister Kaja Kallas tweeted: “There’s a threat to the entire free world, as Russia has launched a full-scale attack against Ukraine — a sovereign European country. NATO consultations on strengthening the security of Allies must be initiated to implement additional measures for ensuring the defence of Allies.”

Fielding reporter’s questions following the meeting, NATO Secretary General Jens Stoltenberg clarified that there were no NATO troops in Ukraine, and there were no plans of deploying any there, despite it being a “highly valued partner”. “What we have made clear is that we have already increased and we are increasing the presence of NATO troops in the Eastern part of the Alliance on NATO territory,” he said.

Following the defence alliance’s decision to beef up its presence on its eastern flank, the Slovak Spectator reports that Slovakia will host an enhanced forward presence of NATO to protect the country. Defence Minister Jaroslav Nad explained, “they will be soldiers from geographically close countries and several hundreds of troops with capabilities that Slovakia does not have.”

Following a meeting of NATO, G7 and EU leaders, also held on Thursday, European Commission President Ursula von der Leyen opined the crisis would bring all of the allies closer together. “It is our shared duty to stand up to the greatest act of aggression on European soil since decades,” she explained. “Our unity is our best strength. The Kremlin understands this very well and that’s why they have tried their best to divide us, but they have achieved the exact opposite. We are more united and more determined than ever. We are one union, one Alliance united in purpose.”

Meanwhile, countries bordering Ukraine have signalled their preparedness to accept refugees fleeing from the hostilities. Romania Journal reports that dozens of Ukrainian citizens and tourists unable to travel because of canceled flights had arrived at Romania’s northern border at Sighetu Marmatiei, where the government was preparing to help 500,000 refugees.

Balkan Insight adds that EU members Lithuania, Latvia, Poland, Hungary, and Slovakia are also prepared for a wave of people escaping from Ukraine, and this morning trains full of Ukrainians were arriving to Poland, which will open eight reception centres near common border regions where refugees will be fed and receive medical care. Of the refugee situation, Slovakia’s Prime Minister Eduard Heger appealed for understanding for those fleeing hostilities and said “We can expect that the Russian aggression will drive many people from Ukraine.”

As reported on Hungary Today, that country’s Defence Forces are prepared to accept refugees fleeing from Ukraine to Hungary, according to Defense Minister Tibor Benko. He said his ministry would cooperate with the country’s Interior Ministry to decide where refugees from Ukraine would enter the border in to Hungary and open up those sections for safe passage, with checkpoints for determining each individual’s status.

Central Europe wakes up to full-scale attack on Ukraine

As West tightens screws on Moscow, CEE countries hunker down