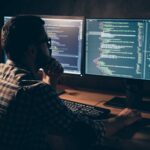 The Eastern European countries with large digital economies such as Estonia, Czechia and Hungary are best placed to stimulate growth by increasing sector productivity, according to reports by McKinsey, Microsoft, IT recruiters and other experts. Although ICT wages remain significantly lower in Central and Eastern Europe (CEE) than on the other side of the continent, they are closing in on convergence at an increasing rate. The region’s ICT employees are most productive in Czechia but earn most in Estonia.

Wages in the ICT sector in Eastern Europe are growing at twice the rate of Western Europe, according to a study by IT recruiter Codecool. For this to continue, countries of this region need to improve productivity, re-skill workforces, avoid the “brain drain” phenomenon, and address existing labour shortages in the sector.

Gauging average ICT-sector incomes is difficult, as wages vary according to position, experience and location. With this in mind, the Central European Times focussed on software developer salaries in the Visegrad Four (V4) countries – Poland, Czechia, Hungary and Slovakia – on the Payscale database, and compared them to regional frontrunner Estonia and European digital leaders Finland and Ireland. Productivity and earnings do not necessarily correlate: in Estonia the average software developer earns EUR 2,334 per month, as compared to EUR 1,424 in Hungary, despite respective labour productivity rates being practically identical (EUR 57,000 and EUR 56,000), the Digital Economy and Society Index (DESI) found.

Czech IT professionals are the most productive in the CEE region, only marginally behind their Finnish counterparts, but earning only 58% in comparison, on average. Although Ireland leads in European IT productivity, with an astonishing EUR 254,000 purchasing power standard (PPS) per employee, wages are nearly identical to Finland (EUR 100,000 PPS). The ICT sectors of Eastern European countries are gaining on their Western peers for productivity – i.e. the level of value added to work and price of products – and enjoy much higher growth than their economies as a whole, as the DESI index demonstrates. As ICT is outperforming other sectors in both these ways, it offers an opportunity to accelerate income convergence with Western countries.

The promise of ICT being a potential driver for closing the gap with Western Europe is especially true for CEE countries with a significant digital economy. Microsoft recently measured the size of digital economies in CEE and European frontrunners in its Digital Futures Index report. The US IT company assessed Eurostat and Euromonitor data on the sectors’ contribution to GDP, the proportion of ICT workers in each CEE economy, the retail value of their consumer electronics sectors and the overall value of the e-commerce sector. As compared to frontrunner Finland’s score of 149, Estonia, Czechia and Hungary have relatively large digital economies with 131, 119 and 111 respectively.

The ICT sector represents 4% of Hungary’s total employment and contributes nearly 6% of GDP, to the auto industry’s 4%. The Hungarian ICT sector’s size coupled with its relatively low productivity level, any improvement in productivity would likely result in a big economic boost. Consultancy firm McKinsey found that further digitisation could create EUR 9 billion of incremental GDP for Hungary by 2025, and be a driver of sustained growth. In Czechia, accelerated digitisation could deliver up to EUR 26 billion in additional gross domestic product by 2025, and make it one of the most advanced economies in Europe in the process.

Higher wages can be bulwark against ‘brain drain‘ phenomenon

The challenges most CEE countries face when leveraging the growth opportunities offered by ICT are brain drains, labour shortages and the urgent need to re-skill national workforces. Hungary lacks some 22,000 IT professionals missing from its labour market, putting the country below the EU average in terms of its base of skilled tech talent, according to the Digital Future Index, while low wages leave the country exposed to brain drains. Czechia performs much better in retaining talents than its regional peers – according to a recent cfoworld.cz survey – as 96% of IT professionals intend to stay in the country. Reasons given include average wages, well-equipped workplaces and the large number of jobs.