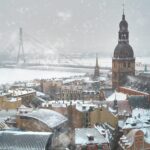 For the citizens of Estonia, Lithuania and Latvia, the signs are ominous. As the Baltic countries look ahead to rising Covid-19 rates in plummeting temperatures, they are meanwhile facing soaring energy bills. The only hope for manageable energy bills is mild weather in the months ahead, representatives of electricity firms say. Last winter, however, was Latvia’s coldest in eight years, as average air temperatures dropped as low as seven degrees below zero.

Latvians see electricity prices triple in a year, but heating is the real issue

For the first time since Latvia’s electricity market was privatised in 2014, its monthly average price has hit triple digits, of over EUR 123.50 per megawatt-hour (MWh), a hike of 41.4% month-on-month, and a staggering leap of more than 300% year-on-year. In addition to the unfavourable conditions afflicting many European countries, the Baltic countries must also deal with the issues of the Scandinavian energy market to which they belong. Scandinavia has not had a good year for renewable energy production, and Latvia’s main supplier’s fixed-electricity price is set to climb 42.9%, to 0.096 euros per kilowatt-hour (kWh). Latvenergo, Latvia’s state energy company, estimates that the average household will pay EUR 8-12 more for electricity this month.

But the more pressing issue is that heating tariffs are rising too. Heating contractor Rigas Siltums hiked its fixed-supply tariff by 27%, to EUR 57.31 per MWh, up from EUR 45.27 on September 1. That tariff will rise another 16% from November 1, putting it at around EUR 66.76 per MWh, plus VAT. This has had a knock-on effect for food and non-alcoholic beverage prices, which have increased 3.8% in 2021. Potatoes are 40% more expensive and fresh vegetables are 23.4% pricier, for instance. The situation in Latvia is better for energy-intensive companies, as local goods such as sawn timber remain in high demand. Wood exports are crucially important to the Latvian economy and expanded 63.2% in July year-on-year, accounting for almost half of the country’s export growth.

Bills in Estonia, Lithuania rise by over 50%

The energy costs situation is still worse in Estonia, where electricity prices are up by more than 50%. Baltic Energy Partners acknowledged that the monthly price for the average domestic consumers will rise by EUR 12-15, and for owners of a larger private residence by EUR 40-60. Those who use electricity for heating could see their bills rise by EUR 100-140 per month.

Lithuanian heating prices could leap by up to 60% this year, as capital Vilnius uses natural gas for heating. Other large Lithuanian cities employ biofuels, which are less expensive but will nevertheless jump by around 40% year-on-year. It is expected that the electricity price for consumers using up to 1,000 kWh per year – around 80% of consumers – will rise by as much as 21% from January, and natural gas tariffs by up to 20%.

Without state support for Covid, situation could be even worse

Even with record-low energy prices last winter, around one-fifth of Latvians struggled to cover housing expenses, the Latvian Central Statistics Bureau (CSB) found, and this ratio looks set to to rise. The occupant of a 37sqm apartment in Riga, for example, will be EUR 30 more out of pocket for heating alone. While a small apartment cost EUR 63.12 to heat this January, by December that will be more than EUR92. Therefore, a total payment will rocket from EUR 122.76 to EUR 152.42, with Latvia’s average net monthly wage being EUR 910, and the mean state pension EUR 411, according to the CSB.

The number of Latvians on low incomes decreased to 7.2% – or around 140,000 people – in 2020, in part due to state benefits prompted by the pandemic. Economists note that, without that government help, the current situation could be worse. Also looming on the horizon is an inflation rate predicted to be nearly 5% by the end of the 2021, a percentage point rise of around 1.4 year-on-year. The International Monetary Fund has warned Vilnius about the risks of an overheating economy.

Baltic solidarity scheme hopes for the best, prepares for the worst

Latvian Minister of Economics Janis Vitenbergs has underlined that Latvia has sufficient resources for the production of electricity, natural gas and heating. Moreover the Baltic states will address soaring prices by signing an energy-crisis gas-supply solidarity agreement., which Vitenbergs said will strengthen regional cooperation in facing any potential energy crisis. The deal will adhere to an EU regulation that states help fellow member countries who are facing serious energy deficits. The Latvian Economy Ministry has promised deductions to around 150,000 energy users, including low-income or large families, and those with a disabled member or a carer.

Estonia’s Economy and Infrastructure Minister Taavi Aas said the state can help only in the short-term on government subsidies for utility payments. Municipalities in Latvia and Lithuania have meanwhile promised subsidies for people struggling to pay their bills.

The Lithuanian government has announced a plan to create a crisis fund to mitigate soaring energy prices over five years, which MPs will now debate in a fast-track procedure. If Parliament passes the bill, around 110,000 more Lithuanians – including pensioners, people with disabilities, and families on low incomes -will qualify for home heating benefits from next year, Social Security and Employment Minister Monika Navickiene said.