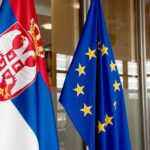 Share this article on:
News in brief Serbia Western Balkans

Serbia moved a small step closer to EU membership on Sunday when 60.5% of its voters cast their ballot in favour of changes to the judicial system in a referendum. President Aleksandar Vucic said the result represented “de facto progress on the rule of law, a theme which is dear to the EU, with which Serbia is in adhesion talks.”

A key part of the Act on the Changes to the Constitution concerns the appointment of judges. The Serbian Parliament will now elect only the General Prosecutor and 5 of the country’s 15 Constitutional Court judges. Additionally, MPs will no longer be allowed to serve on the two judicial councils that will oversee other appointments.

EU Commissioner for Neighbourhood and Enlargement Oliver Varhelyi tweeted that “I welcome this important step and commitment to EU path. We will continue to work with Serbian authorities on ambitious reform agenda, advancing EU integration.”

Many of Serbia’s opposition politicians were dismissive of the referendum, however, underlining that the government had not involved them in drawing up the amendments. MPs and lawyers also expressed doubts that judicial independence will be guaranteed, despite the “Yes” vote. Moreover, overall turnout for the plebiscite was only around 30%.

Of the 35 areas of public life – or ‘chapters’ – that must be satisfactorily addressed by EU accession candidate countries, Serbia has ‘opened’ 18 and closed just 2. Chapter 23 on judicial matters is considered one of the most important. Serbians will vote in a general election on 3 April, when Vucic, as president of the populist Progressive Party, will seek to extend a decade in power.