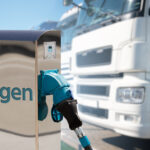 Will hydrogen save Europe during the energy transition?

Will hydrogen save Europe during the energy transition?

One well-known energy resource has great potential as an increasingly cost-effective source of clean energy: namely, hydrogen. It can play an important role in Europe’s CO2-free energy supply, through its low-carbon green and blue forms. Investment bank Goldman Sachs estimates that hydrogen could meet up to a quarter of the world’s energy needs by 2050, and the price of green hydrogen could fall by 70% in countries with cheap renewables over the next decade. It is no coincidence that the European Parliament and the world’s leading energy companies also recognize its potential.

Today, there is no question that climate change is caused by human activity, and global warming and its magnitude are directly linked to the concentration of greenhouse gases – of which, above all, CO2 makes up the lion’s share. Thus when considering the benefits of a new energy source, we must first look at the extent of it’s CO2 emissions, otherwise known as its carbon footprint, which indicates how much carbon dioxide a given activity emits.

If we focus on a segment such as transport, which relies heavily on fossil fuels, it turns out that only a quarter of total global CO2 emissions could be captured using a climate-neutral fuel. Electromobility could also help, but the majority of electricity today comes from fossil fuels, and the existing vehicle fleet and petrol station network are not electricity-compatible. And ships, planes, heavy goods vehicles, and industrial vehicles do not yet run without high-energy-density oil derivatives. Hydrogen, on the other hand, can be used to replace gasoline, diesel, and kerosene in terms of both energy density and service infrastructure. From a climate point of view, however, it is only worth relying on hydrogen propulsion if its production is also carbon neutral.

It doesn’t matter if it’s green or blue

Where liquid fuel is needed and greening is the goal, there is no real alternative to hydrogen. However, the problem is undoubtedly that in the traditional process, hydrogen is produced from natural gas (which is 97% methane) and carbon dioxide is also generated in the process – which is exactly what we want to avoid by leaving out fossil fuels. The reason that energy companies still place their bets on clean hydrogen is that production technologies that do not produce CO2 or release it into the environment also exist and are evolving rapidly. The difference is in the processes; the end product is chemically the same, yet it goes by a different name according to the production methods: for green hydrogen, the whole process is CO2-free, while for blue hydrogen, greenhouse gas is eliminated during production and removed from the environment.

In practice, green hydrogen is produced by breaking down water molecules into their constituents, hydrogen and oxygen, by electrolysis. If the electricity required for this is also obtained from a clean source, such as solar, wind or hydropower plants, the whole process is carbon neutral and waste-free. From a technical point of view, the production of blue hydrogen is a more serious challenge: here, as mentioned earlier, methane (a greenhouse gas twenty times more potent than CO2) is basically the starting material, and in addition to hydrogen, carbon dioxide is also produced and stored. So-called CCS (carbon capture storage) or CCUS (the former supplemented by use) technology is also part of the process. In this case, the separated CO2 goes to underground storage – often in the same place where the natural gas was previously mined.

Hydrogen is a force to be reckoned with during the energy transition, as it has obvious benefits. It does not increase the concentration of greenhouse gases in the atmosphere, and the existing supply infrastructure is also suitable for distribution – two main advantages that are mentioned in a recent European Parliament document which places hydrogen at the heart of the green switchover. Of these two suitability criteria, hydrogen is the most apt carbon-neutral energy source for the direct replacement of fossil-derived energy. That is why the European Commission proposed last year to develop an EU hydrogen strategy to accelerate the development of ‘clean’ green and blue hydrogen, in order to achieve climate neutrality. Moreover, this is in line with the aspirations of the world’s leading energy companies.

ExxonMobil believes that hydrogen will play a major role in the energy transition and the achievement of future climate goals. Therefore, building on its decades of experience in the production of clean fuels, it is involved in several hydrogen projects globally. ExxonMobil launched a new business unit in February of 2021 focusing on the development of low-carbon technologies, including CCS and hydrogen production. CEO Darren Woods says new technologies and their existing businesses are the ideal combination to enter this spectacularly evolving market. By 2025, USD 3 billion is planned to be invested in lower greenhouse gas emitting technologies such as hydrogen production. However, the commitment of manufacturers alone is not enough for a green turn in energy supply. For example, the Fit for 55 package, which aims to reduce EU CO2 emissions by 55% by 2030, significantly underestimates the climate-saving potential of clean hydrogen. The solution would be a technology-neutral regulation that gives all solutions, regardless of fuel type, a green light and an equal chance that can effectively reduce CO2 emissions.

Europe’s largest CCUS test plant, which could be the world’s first industrial-scale CO2 capture and storage facility, received EUR 2 billion in government support in May 2021 from the Dutch government. A joint project between industrial gas suppliers ExxonMobil, Royal Dutch Shell, Air Liquide and Air Products aims to store CO2 emitted by factories and refineries in the industrial port area of Rotterdam in empty gas fields in the North Sea. Joe Blommaert, head of ExxonMobil’s Low Carbon Solutions business, says hydrogen has the potential to become an abundant and affordable source of energy to minimise greenhouse gas emissions. The new business will focus its efforts on the two most difficult carbon-neutral industries, heavy industry and power generation. They also aim to enable sectors responsible for around 70% of global industrial CO2 emissions to contribute to meeting climate targets. Two Norwegian (cement and energy) CCUS test projects and a third in which CO2 is extracted directly from the air are also focused on that.

This article was submitted to Central European Times by ExxonMobil Hungary.