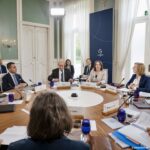 Share this article on:
Diplomacy News in brief Western Balkans

G7 ministers expressed their concern about the “deepening political crisis” in Bosnia and Herzegovina (BiH) and support for the commencement of EU accession negotiations with Albania and North Macedonia, following a meeting in northern Germany at the weekend.

In a strongly worded joint statement, the foreign ministers of the US, the UK, Canada, France, Germany, Italy and Japan, as well as the EU’s high representative, condemned the recent “secessionist policies” of one of the BiH’s two political entities, the Serb-dominated Republika Srpska (RS).

The statement read: “We are concerned about the deepening political crisis in Bosnia and Herzegovina and condemn any attempt to undermine the unity, sovereignty and territorial integrity of the country.

“We will not tolerate Republika Srpska’s secessionist policies, which endanger Bosnia and Herzegovina’s future and the stability in the region. We urge the return to full functionality of governments at all levels to resume their work fully, putting aside divisive and inflammatory rhetoric and avoiding any act that could destabilize Bosnia and Herzegovina,” the statement added.

The countries expressed strong support for the swift commencement of EU accession negotiations with Albania and North Macedonia. “We call upon the countries in the region to advance internal reforms, in particular on rule of law, to expand domestic political space, to improve the environment for civil society and independent media, to pursue their efforts in the prevention of radicalisation to violence, to support reconciliation, and to fight against genocide disinformation, as well as the glorification of war crimes and convicted war criminals,” they added.

The statement also urged “Kosovo and Serbia to engage constructively in the EU-facilitated Dialogue, to fully implement all past agreements with no delay, and to normalize their relations through a comprehensive and legally binding agreement, which will allow for the realization of their respective European perspectives, contribute to regional stability and benefit all people in the region.”

Acknowledging a “fundamentally changed strategic and security environment”, the G7 countries welcomed “that the Western Balkans stand united in condemning Russia’s war of aggression against Ukraine, especially in the UN General Assembly.

“We commend Albania, Kosovo, Montenegro and North Macedonia for fully aligning their foreign policies with the EU, including sanctions and their implementation. We urge Serbia to do the same,” the official joint statement underlined.