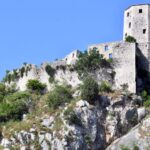 Share this article on:
Diplomacy News in brief Western Balkans

International, CEE community on high alert as Bosnia and Herzegovina teeters on brink

International, CEE community on high alert as Bosnia and Herzegovina teeters on brink

The Balkans are in danger of instability as the multi-ethnic state of Bosnia and Herzegovina (BiH) looks at risk of disintegration, according to regional observers. UN High Representative in BiH Christian Schmidt told Reuters on Saturday that the peace deal brought an uneasy peace to the country after the Balkan Wars of the 1990s, is now at risk of unravelling unless the international community makes moves to stop Serb separatists.

The US-brokered Dayton Agreement signed in 1995 ended three and a half years of fighting between Bosnian Serbs, Croats and Muslim Bosniaks by splitting the country along ethnic lines into two autonomous regions: the Serb-dominated Republika Srpska and the Federation of BiH, which Croats and Bosniaks share. Since then the country has been governed by a fractious three-member presidency that comprises one Serb, one Croat and one Bosniak politician.

Republika Srpska leader Milorad Dodik recently threatened to withdraw from shared BiH institutions including its tax authority, medicines agency and – most notably – military. Schmidt expressed hope that international pressure will move developments in a “sensible direction”, but added that Republika Srpska withdrawing from the joint armed forces and creating its own separate army in BiH would be a step too far. “If this proves to be true… then we in the international community will have to think very, very, very seriously about how we can move forward,” he said.

Hungarian Prime Minister Viktor Orban met with Dodik in Banja Luka, the capital of Republika Srpska, at the weekend. Dodik said they had discussed the current situation in BiH and denied that Serbs are destroying the country’s territorial integrity. Orban said history shows that whatever happens in the Balkans affects the whole region. He also offered economic support to Bosnian Serb companies.

US Deputy Assistant Secretary of State Gabriel Escobar also visited BiH, and told Radio Free Europe that any attempts to undermine the Dayton Agreement would be “very detrimental and very destabilising to the region”. Escobar assured BiH citizens that the international community will collectively ensure that “commitments to the peace and security of the people in the region are met. We are committed that there will not be a war,” he underlined.

Bulgaria gets reduced gas price from Gazprom before elections