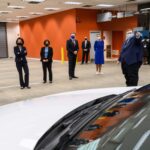 EU and US join forces on microchips, AI

EU and US join forces on microchips, AI

At the first meeting of the newly founded EU-US Trade and Technology Council (TTC) the EU and the US governments have set the stage for closer technological cooperation and a sharing of progressive trade rules.

The aim of TTC is two-fold: simultaneously support domestic industries and achieve a higher level of technological self-reliance. The new forum is aimed at tightening economic cooperation, improving digital policy coordination and speeding up conflict and trade dispute resolution.

Among the accomplishments of its first meeting was the outlining of a plan to cooperate on a range of topics: from microchips, robotics, forced labor, disinformation, counterfeiting, algorithm transparency, cloud infrastructure, and cyber-security to the digitalization of SMEs – all with the aim of tackling much more complex challenges too, including regional peace and human rights, climate change and fair competition.

At the TTC signing ceremony in Pittsburgh, the EU was represented by digital policy and competition law EC commissioner, Margrethe Vestager, and EC commissioner for economic and trade matters, Valdis Dombrovskis. To underpin the diplomatic relevance of the meeting, the United States was represented by Secretary of State Antony Blinken and Commerce Secretary Gina Raimondo.

Beyond the pleasantries of their bilateral meeting, there are several unresolved trade disputes between the EU and the US, among them the EUR 6.4b Trump-era tariffs imposed on EU-made steel and aluminium, which have been in place since early 2018. In retaliation, the EU first place EUR 2.8b in extra duties on US imports, but suspended a second hike of EUR 3.6 billion to give leverage to ongoing trade dialogue regarding the issue.