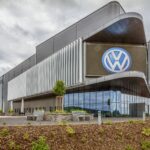 Volkswagen will consider bringing factories closer to the point of sales, in the medium-term, Wu added, citing the worldwide shortage of microchips and potential supply-chain issues.

The announcement indicates that the Russian-Ukrainian war and the related economic crisis may rearrange Europe’s industrial landscape, newswire Bloomberg wrote.

The relocation of production capacity for some car part makers is an option if gas shortages beyond this winter. CEE component suppliers are Europe’s most reliant on Russia gas.

Thomas Steg, VW’s head of external relations, said politicians must end the current explosion in fossil fuel prices. Without that SMEs operating mainly in energy-intensive sectors will be forced to cut their production or shut down, Steg said.

Suppliers in energy-intensive areas such as glass and chemicals will struggle with fossil price hikes, Volkswagen said.

Although most car parts made in Europe are used by plants nearby, some are shipped to units abroad. A single missing piece can bring production to a standstill, as shown by the recent issues around the recent semiconductor shortage, the company explained.

The relocation could be towards northern and southern European countries with coastlines and LNG ports, a VW spokesperson said. The Volkswagen Group currently has factories with LNG terminals in Belgium, Portugal and Spain and Belgium.

The exit from CEE would affect almost 60,000 jobs at plants owned by Volkswagen Group in Poland, Slovakia, Czechia, Hungary and Bosnia and Herzegovina.

Europe’s largest car maker employs 27,273 in Mlada Boleslav, north Czechia, at its main factory, R&D and headquarters of Skoda Auto. In Czechia, Skoda Auto has a workforce of 6,890 in Kvasiny, and of 824 at the Skoda factory in Vrchlabi, north Czechia.

In Poland Volkswagen has a payroll of 5,531, in one plant in Poznan and 3,371 at Volkswagen Commercial Vehicles, in the same city. The company’s MAN Truck & Bus plant in Starachowice, south east Poland, employs 3,090.

The MAN Truck & Bus plant in Krakow, south Poland, has a payroll of around 1,700, while Volkswagen employs 758, in Slupsk, north west Poland.

The move could also affect the 12,226-employee Audi factory in Gyor, west Hungary, which Volkswagen owns. Meanwhile in Martin, north Slovakia, Volkswagen currently employs 859, as well as 94 employees in Sarajevo, Bosnia and Herzegovina.

Hungarian business outlet Napi.hu wrote that it is not that Volkswagen is considering relocating its CEE factories if energy prices do not fall, but they may even bid a sensitive farewell to Germany.

This makes it easier to understand why former German chancellor Angela Merkel negotiated with the Russians in order to keep the Russian energy source, which was still predictably arriving at the time, sacrificing energy diversification. Merkel only followed her predecessors on the path on which German industry became vulnerable to Russian gas, the Hungarian business outlet added.