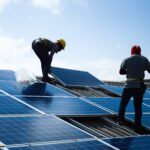 The European Commission (EC) adopted a EUR 300bn proposal for the 27-country bloc to be entirely independent of Russian energy by 2027, on Wednesday 18 May.

“We must now reduce as soon as possible our dependency on Russian fossil fuels. I’m deeply convinced we can,” EC President Ursula von der Leyen said.

Combining strategies on renewables, energy efficiency and diversification, REPowerEU would make solar panels mandatory on public buildings by 2025 and new residencies by 2029, but would involve short-term investment in fossil fuel infrastructure.

Russian gas usage would be cut by two-thirds by the end of 2022 and would reach independency within five years, while renewable energy capacities were built up.

The EC wrote in a press release that “recent gas supply interruptions to Bulgaria and Poland demonstrate the urgency to address the lack of reliability of Russian energy supplies.”

Executive Vice-President for the European Green Deal Frans Timmermans tweeted that “​back in March we showed it could be done. In Versailles, Europe’s leaders agreed it should be done. And today, we set out how to do it.”

The EU will continue to support the energy security and green transition of Ukraine, Moldova and the partner countries in its immediate neighbourhood, the EC added.