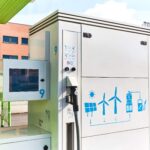 Share this article on:
Energy News in brief Transport

Production of “green” hydrogen produced with renewable energy sources may be coming into focus for the European Union as a way to reduce CO2 emissions. EU officials say the cost of producing it should fall, if the gigawatt capacity of electrolysers is ramped up sufficiently.

At an event in Brussels on Monday, European Commission President Ursula von der Leyen said that the cost for producing green hydrogen could decrease from today’s approx. EUR 6/kg to EUR 1.80/kg by 2030.

When electrolysers powered by renewable energy are used to split water molecules into hydrogen and oxygen, so-called green hydrogen is produced. The result is a clean-burning fuel that is near zero carbon, one which can be used to power heavy industries. Traditional, “grey” hydrogen requires natural gas for production.

Now, the high price of natural gas seen in Europe and elsewhere has driven up the costs of grey hydrogen, making the production of green hydrogen more competitive. Meanwhile, the price of carbon emissions has also gone sky high due to the EU’s emissions trading system, adding an additional cost to the current skyrocketing prices for hydrocarbons.

Zaev to step aside as North Macedonia PM