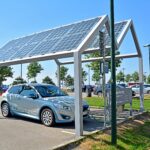 The Czech government and energy company ČEZ have signed a memorandum of support for the construction of a battery factory for electric vehicles, a so-called “mega factory,” in the Czech Republic. The plan has been approved by the government, according to the deputy prime minister and minister of Industry and Transport, Karel Havlíček. The investment should amount to at least CZK 52 billion in the first phase, and the new factory would create some 2,300 new jobs. The Czech Republic, according to estimates, holds about 3% of the world’s lithium sources with the vast majority in Cínovec and in a small amount in Slavkovský les. The deposit near Cínovec is the largest in Europe.

The Czech state is looking to attract a partner from the car or battery industry for the project that could have an annual capacity of 40 GWh. Industry minister Karel Havlicek said talks have been held with Volkswagen, which owns Czech carmaker Skoda Auto, and with South Korea’s LG.