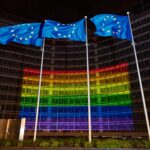 Alleging that Hungary and Poland have violated the fundamental rights of LGBTIQ+ people, the European Commission has launched proceedings against the two countries on 15 July. For one, the EU executive body points out that Hungary’s recently passed law violates fundamental freedoms – including the rights of persons belonging to minorities – through its banning from schools material that deals with homosexuality or gender reassignment.

In some specific incidents, Hungarian government authorities have forced publishers to include disclaimers on storybooks portraying LGBTIQ+ themes, even issuing a fine in one case.

Meanwhile, the Commission’s actions against Poland have to do with municipalities and regions in the country having designated “LGBT-ideology free zones,” about which Polish authorities have not submitted information to the Commission for proper analysis.