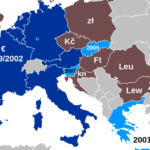 Croatia has been given the go-ahead to adopt the euro from the start of next year, when it will become twentieth country to do so, and the first since Lithuania in 2015.

Having received positive assessments of the ECB and the European Commission, the path for euro adoption is now clear for Croatia, where MPs last week approved legislation on introducing the single currency on 1 January, 2023.

Croatia, as well as Bulgaria, has been part of the European Exchange Rate Mechanism II assessment process since 2020, a challenging economic period due to the global pandemic and Russia’s invasion of Ukraine.

The European Central Bank (ECB) found in its report that Croatia fulfils its own four nominal convergence criteria involving prices and fiscal developments, as well as exchange rates and long-term interest rates.

In a separate assessment, the European Commission (EC) also positively reported on Croatia joining the Eurozone.

Croatia’s 12-month average rate of Harmonised Index of Consumer Prices (HICP) inflation up to April was 4.7%, below the reference value of 4.9%, while its budget balance was just below the required 3%. The country’s debt ratio was above 60%, but falling. Conversely, Bulgaria’s HICP inflation was over the threshold at 5.9%, and its budget was well over 3%.

EC President Ursula von der Leyen tweeted “Croatia has made a significant step towards joining the euro, our common currency. The EC agrees that Croatia is ready to adopt the euro on 1 January 2023,” and addressed the Croatian Prime Minister directly: “We will continue our close cooperation, dear Andrej Plenkovic.”

Croatian Finance Minister Zdravko Maric said the country would now join “the most developed group of countries in the world”.

The ECB also assessed the economies of Poland, Czechia, Hungary and Romania – with the latter country the most enthusiastic about joining the single currency, but not currently meeting any of the convergence criteria.

Valdis Dombrovskis, EC Executive Vice-President for an Economy that Works for People, said the euro “will bring real benefits to Croatian people and businesses and make Croatia’s economy more resilient. It also shows that the euro remains an attractive and successful global currency. Our currency is a symbol of Europe’s strength, unity and solidarity at a time when these qualities are being tested by a war raging on our doorstep.”

Paolo Gentiloni, EC Commissioner for Economy, said: “Today marks a historic milestone on Croatia’s European journey, reflecting the determined efforts the Croatian authorities have made to meet the criteria for entry into the euro area. In the year in which we celebrated the twentieth anniversary of the euro’s birth as a physical currency, the euro area as a whole can now look forward to welcoming its 20th member.”

It is now up to the European Parliament and the EU’s 27 member country’s premiers to formally approve Croatia’s membership of the Eurozone.