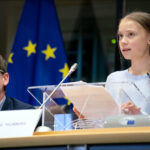 Share this article on:
Aviation Climate News in brief

MEPs on the environment committee of the European Parliament (ENVI) will vote on a tranche of environmental proposals early next week. On Monday and Tuesday (16-17 May), the ENVI will decide on around half of the regulations detailed in the European Commission’s Fit for 55 package to cut greenhouse gas emissions by 55% by 2030.

According to MEP and ENVI chairman Pascal Canfin, the EU’s flagship emissions policy “has been decided at the European level (and) is a radical objective, because it means we need to change our economic system for a generation and have an organisation capable of meeting that ambition.”

The EU emissions trading scheme, originally put in place in 2005, permits industry to purchase CO2 allowances on the market and sidestep emission quota requirements. Prices for these allowances ballooned to an all-time high of EUR 100 per tonne in February, Euractiv noted.

Next week, the ENVI is expected to back from 2025 inclusion of the maritime, transport and building sectors, and the phasing out of free allowances for the aviation sector.

“We are going to toughen up the game for industry,” Canfin told members of the press on Thursday, 12 May. The ENVI’s proposed reforms to the EU carbon market are “the flagship of European climate regulation”, the centrist Renew Europe group member underlined.

MEPs who belong to ENVI will also cast their ballots on whether to introduce carbon border adjustment mechanism (CBAM) from 2025, a year earlier than the European Commission’s proposed start date.

According to Canfin, a “reasonable majority” should back this “strengthened CBAM”, speeding its implementation and widening its scope to other sectors, when ENVI MEPs vote next week.