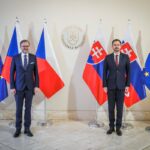 Share this article on:
Czech Republic News in brief Slovakia

Fiala gets thumbs-up, vows to back EU

Fiala gets thumbs-up, vows to back EU

The liberal-conservative cabinet of Czech Prime Minister Petr Fiala was approved by a majority of MPs in a confidence vote that is obligatory for all incoming governments on Thursday. In all, 106 lawmakers backed Fiala’s government, while 87 opposed. Czech governments face this customary vote within 30 days of inauguration.

Facing a three-ring crisis of escalating energy prices, budget deficit and Coronavirus rates, Fiala said his coalition plans to expand nuclear and renewable energy, cultivate the reputation of a reliable EU partner, and be a government of change.

Fiala’s centre-right SPOLU (Together) alliance narrowly defeated then prime minister Andrej Babis’s populist ANO party in October. The five-party coalition is committed to democratic reforms and is predominantly pro-EU, in contrast to Babis’s increasingly eurosceptic government. After Czechia spent two months in political limbo, mainly due to the ill health of President Milos Zeman, the Together cabinet was sworn in on 17 December.

Under its new government, Czechia looks set to ally with its Western-oriented neighbour Slovakia. On his first foreign trip on Tuesday – to Slovakia as is customary for Czech leaders – Fiala met with his opposite number Eduard Heger, who later tweeted: “Honoured to welcome Czech PM Petr Fiala in Slovakia during his 1st foreign visit. Together with Czechia, we’ll be forming European space and enhancing global role.” Heger added that the two had agreed to coordinate policy moves both in their EU Council presidencies and at meetings of the Visegrad Four group of countries, which is completed by eurosceptics Poland and Hungary.