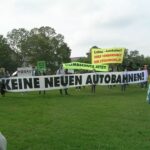 After 20 years of fierce debate, the plan to construct a EUR 2 billion stretch of ring-road on Vienna’s north-eastern outskirts has been cancelled after scientists warned against building a motorway tunnel underneath a nature reserve.

Austrian Climate, Environment and Transport Minister Leonore Gewessler announced the kiboshing of the Lobau Tunnel Construction Project at a press conference on Wednesday. “I don’t want us to say in 20 years that we … poured concrete over our future”, the Green politician told journalists, adding that more roads inevitably bring more traffic.

Vienna’s furious Social Democrat (SPO) mayor Michael Ludwig said he was considering legal steps over the cancellation, arguing that the Austrian capital’s roads are already unacceptably congested. The Viennese Conservatives OVP called the decision “a slap in the face” and also promised to contest the decision.

Green activists have protested for two decades that the project would degrade the Lobau wildlife reserve in Danube-Auen National Park, and have been occupying construction sites since late August, as they did in 2006, metropole.at reports.

Tensions have risen inside Austria’s uneasy coalition between the Greens and the conservative OVP in recent weeks, particularly over whether former chancellor Sebastian Kurz should step back from public life while corruption probes are carried out, Euractiv writes.