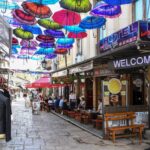 With hopes of Bulgaria lifting its veto on North Macedonia’s potential bid to join the European Union, today Bulgaria’s president, Rumen Radev, will get a chance to meet with the prime minister of North Macedonia, Zoran Zaev, at a high-level gathering in Slovenia including Chancellor Angela Merkel and French prime minister Emmanuel Macron.

In fact, leaders from six Western Balkan countries and officials from the European Commission will also be there at the EU-Western Balkans summit, where the status of various Balkan countries’ stage of the EU accession process is being discussed. While some countries’ accession deliberations, like Montenegro and Serbia, are in progress, North Macedonia is waiting for the beginning of formal talks – but that’s been scuttled by the veto of EU member Bulgaria, which says it’s trying to protect the rights of ethnic Bulgarians in North Macedonia.

Bulgaria’s vice president has said that nothing is likely to change via the meeting with president Radev and prime minister Zaev. Observers point out that Sofia is not likely to lighten up on its stance toward Skopje until after elections take place in Bulgaria on 14 November.