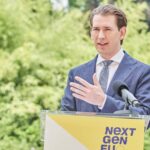 Share this article on:
Country reports Diplomacy News in brief

Alexander Schallenberg is expected to be sworn in “within days” as Chancellor of Austria following the resignation of Sebastian Kurz over the weekend.  It would be an “enormously challenging task,” said 52-year-old Schallenberg, who has been Austria’s foreign minister since 2019.

Kurz, 35, stepped down on Saturday amid claims of corruption. His decision to quit amidst allegations of corruption means that the governing coalition between his conservative Austrian People’s Party (ÖVP) and the leftist Greens will continue. Green parliamentary group leader Sigrid Maurer said Schallenberg was not implicated in the corruption scandal.

Pressure on Kurz to resign mounted after prosecutors on Wednesday raided several locations linked to the ÖVP. They announced subsequently that Kurz and nine other people were under investigation regarding government money having been used between 2016 and 2018 in a corrupt deal to ensure positive media coverage. One of the key accusations is that Kurz paid off pollsters and journalists to publish false information which served his political agenda when he was still foreign minister of the country .

Kurz has denied any wrongdoing, saying that allegations against him were “false” and that he would seek to clear up the matter while he continues as party leader. The Greens had signaled that they would topple Kurz in a vote of no confidence on Tuesday in parliament if he did not stand down.

The ÖVP-Greens coalition began governing in January 2020. Kurz has already resigned once as chancellor during the 2019 Ibiza affair – a scandal involving his deputy, Heinz-Christian Strache from the radical right FPÖ – which led to the collapse of the ÖVP-FPÖ government but also to a victorious comeback of Kurz at early elections in September 2019.  Analysts say it would be way too early to count Kurz out, as he has retained leadership of the party and most probably also the parliamentary group.