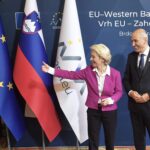 EU leaders reaffirmed their commitment for six Western Balkan countries to join the Union, but held off opening full negotiations with Albania and North Macedonia at a one-day EU Summit in the Slovenian city of Brdo.

“The Western Balkans are part of the same Europe as the European Union. The EU is not complete without them,” EU Commission president Ursula von der Leyen said. “My commission will do its utmost to advance the accession process.”

But some national governments, who have a veto right on opening negotiations, are not convinced this is an urgent matter.

“In all frankness, there is discussion among the 27 about our capacity to take in new members,” said EU Council president Charles Michel, who chairs the meetings of EU leaders.

What the EU finally did agree on in Slovenia was to create a new EUR 9 billion economic and investment plan for the six Western Balkan countries. Ahead of the meeting, Albanian prime minister Edi Rama had already warned that the region should not expect too much of the EU. “Europe is not in a very good moment, with many internal problems, enlargement is not received with enthusiasm,” he said.

Recent focus remains on Albania and North Macedonia, which have met reform demands from the EU and are expecting to be invited to a formal conference to launch their accession negotiations. But EU-member Bulgaria is holding up the process by exercising its veto over a longstanding dispute with North Macedonia about culture and language. The presidents and prime ministers of Serbia, Montenegro, Kosovo, and Bosnia and Herzegovina were also all present for the summit. These countries are all at different stages of EU accession, and are waiting for a timeline from the EU.

In a separate-yet-related matter, president Ursula von der Leyen was forced to defend her staff at the summit. Enlargement commissioner Oliver Varhelyi from Hungary has been accused by Brussels-based publication Politico of watering down judicial and democratic demands on Serbia during its accession process. But von der Leyen insisted that “all commissioners have my full confidence.”