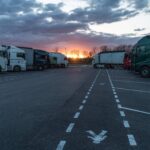 Hauliers associations in Poland and Hungary say their members are not interested in the UK government’s offer of three-month work visas as an attempted solution to its growing petrol queues and lorry driver shortage.

Over a million Poles and hundreds of thousands of Hungarians have lived and worked in the UK since the EU expanded into Central and Eastern Europe in 2004. However Britain’s exit from the bloc, the customs union and the single market last year, coupled with the pandemic, has exacerbated the country’s shortage of HVG drivers. Shelves have looked sparse at many supermarkets throughout the summer, and recent days have seen long queues forming outside petrol stations.

Meanwhile, Hungarian Road Transport Association spokesman Tivadar Arvay said members of the 2,500-strong body would be worried about having to leave hurriedly after their visa expired. “There’s much distrust now against working in the UK, given that the country is giving ad-hoc answers to its imminent problems,” he added.

Asked on Tuesday whether Germany would consider sending hauliers to the UK to help with its petrol queues, Olaf Scholz said “the free movement of labour is part of the European Union, and we worked very hard to convince the British not to leave the Union. Now they decided different, and I hope that they will manage the problems coming from that.”

Scholz, the favourite to become Germany’s next Chancellor added that “this is a problem to be solved: it might have something to do with the question of wages. If people want to decide for a certain job they want to know if it’s something very good for their whole life… this has something to do with working conditions and this has to be thought about,” he said.