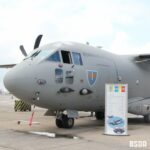 Companies from at least nine Central and Eastern Europe (CEE) countries will present their products and services at the upcoming military, aeronautical and security equipment exhibition Black Sea Defense and Aerospace (BSDA) in Bucharest, Romania.

The biannual event’s organisers describe BSDA as a platform for Romanian companies to establish contacts with global players and conclude partnerships. Over 380 companies from the defence, aeronautics and security sectors and more than 300 foreign delegates have already announced their participation at the event.

From Bulgaria, EP &IC and Syscom Engineering will be in Bucharest, alongside Dok-ing Ltd of Croatia, Lithuania’s Altimus-Tech and Serbian company Tehnolink.

The US will have the most significant presence at this year’s BSDA, which is the eight event overall. As well as Lockheed Martin, exhibitors will include Raytheon Technologies, General Dynamics, BAE Systems, L3Harris, Elbit Systems, Rafael Advanced Defense Systems, Naval Group, MBDA, Airbus, Damen, Iveco Defense Vehicles, Beretta and Leonardo.

Romania’s Prime Minister Nicolae Ciuca, Defence Minister Vacile Dincu and Intelligence Service Director Eduard Hellvig will be among the attendees at the event, which is supported by the Romanian government and the US Embassy in Bucharest, and will run from May 18 to May 20.